Okay, this post has been... six days in the making, so it may feel a little disjointed and there might be a lot of spelling mistakes because:

Long-story-short, ribs went out again. I had four chiro appointments in two days, plus my usual rounds of physio/massage/acupuncture appointments...

And in the end, nothing would settle down, so it was time for a few days of ice, lying still, and some codeine-heavy anti-spasm muscle relaxants. Fun, fun, fun. I'm still kinda loopy, hence the warning about spelling/wording mistakes/etc.


So, the seminar... I was excited about this for months. My grandmother always gives money for birthdays/Christmas (one of the perks of being 1 of only 2 grandchildren), and I always hang onto it until I can buy something nice/special... so it doesn't just disappear into grocery bills, gas, etc.

Since seminars are quite expensive, and since my arm/etc was in poor shape, I didn't sign up for any workshops at the convention, and I only signed up for the one seminar (but there was another one I would have liked to have taken...)

...which ended up being good because... essentially, I paid a lot of money to 'watch'.

I was able to do a bit of the prep stuff, but NO painting. It was very frustrating, both because I had been so excited and because I couldn't even control my arm enough to freaking load paint on it properly... it shook so badly that it globbed onto the bristles.

But I am still REALLY glad I took the seminar.

In seminars, everyone paints the same piece the same way. It's about learning specific techniques, and that (of course) works best when everyone is doing the same piece.

Here's a not very good picture of the piece (I pulled it off the web). 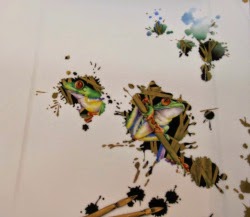 Just like Patrizia's method of painting gold on a black background is very unique (and normally very difficult), the main technique we were learning was painting regular paint on top of gold.

YEAH... again, her work is so different and amazing because it's like she turns the 'normal' rules around. Since gold is so expensive, usually you put it on last.


Just to put this out there for those who don't know, since these are seminar pieces, a student would never claim them as 'their' work or sell them as their work because the teacher paints on your piece to show you how to do it correctly. 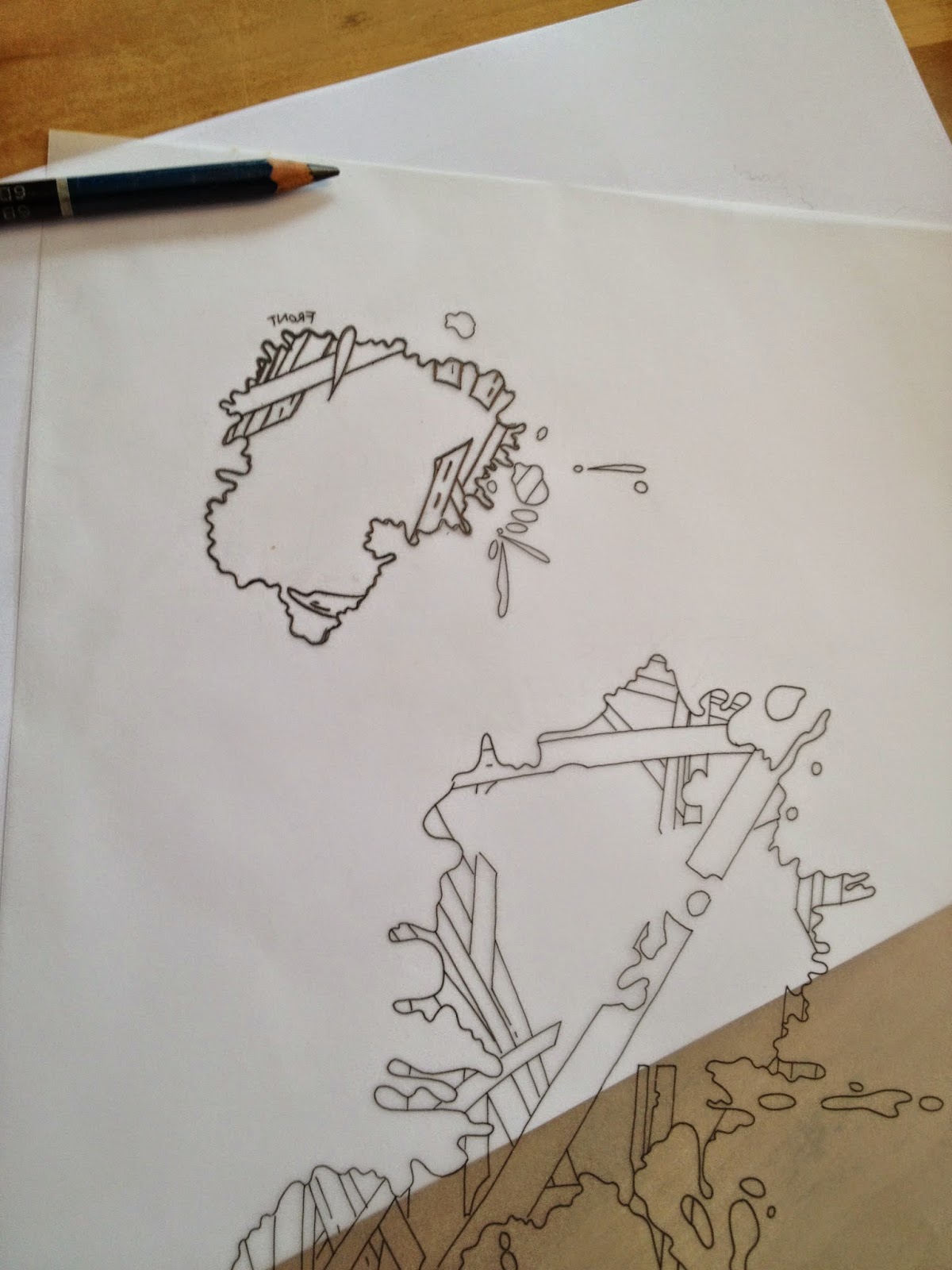 Tracing paper... the design is drawn on with a  black micron pen. THEN, you use a special porcelain pencil, and draw on the backside. In my case, since I'm disobedient, I used a Staedtler 6B pencil, and it worked just fine... BUT, you can't use just any kind of pencil, because lots of them won't fire off in the kiln, and then you're left with grey smudges mixed in - permanently - with your paint.

Then you tape the tracing paper (right side up) onto the porcelain and use this funny stylus tool (sorry, no pic of it) that is like a bent pin with a tiny ball at the end to draw over the lines. This will transfer a thin pencil line onto the porcelain (see next picture). 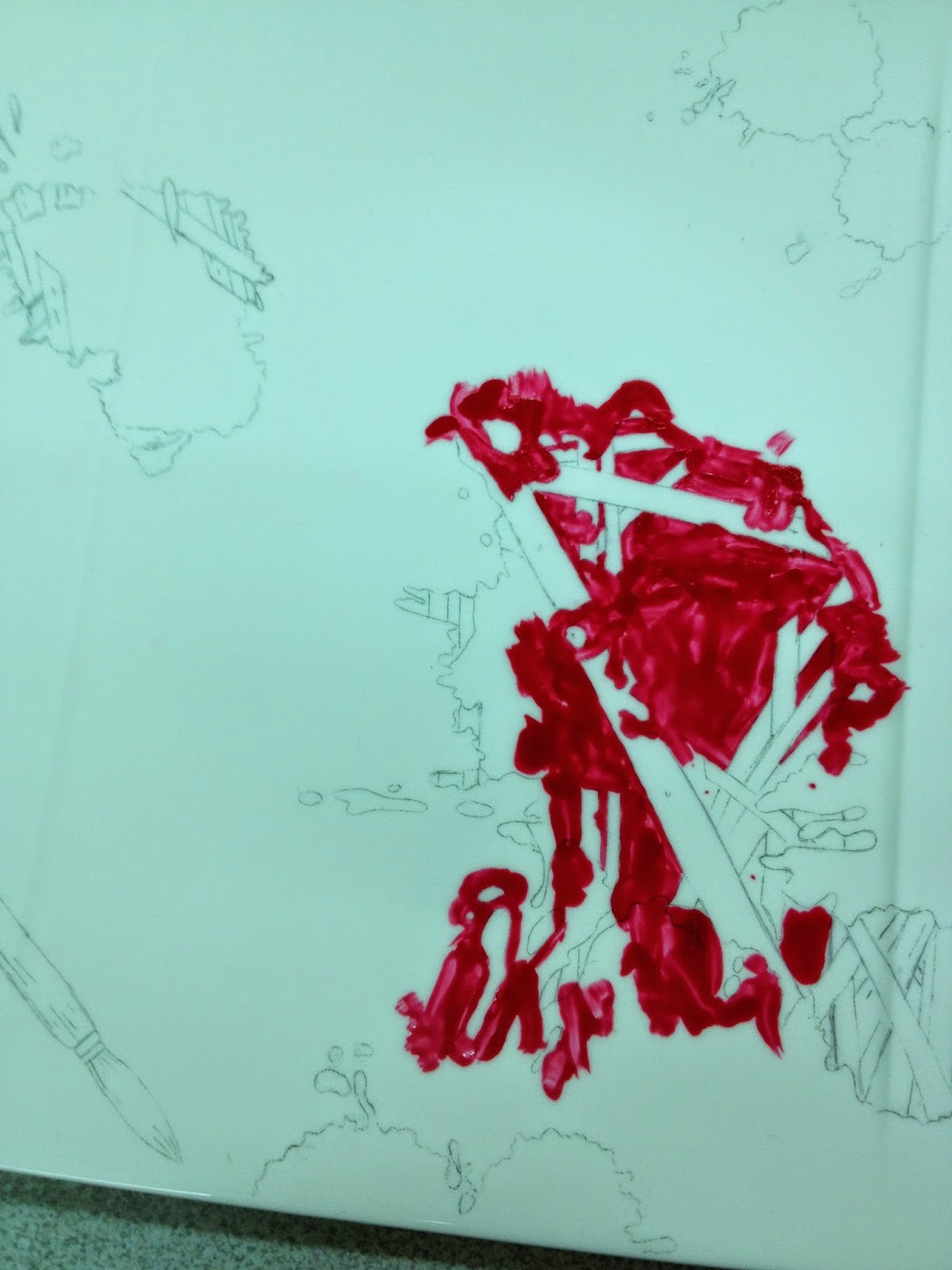 Then  comes the joy of red resist. That wasn't sarcastic... I actually really like using red resist because it allows you to work with very complex designs.

The only part that wasn't fun was, since I HAD to use my poor right hand to draw with the pencil, and then use the stylus tool to transfer the pencil to the porcelain, my right arm was shaking so bad I couldn't even hold the brush.

So... red resist all done with my left hand... which didn't get me the clean lines I would have wanted, and even though it took about twice as long as it would have, I did get better at it. 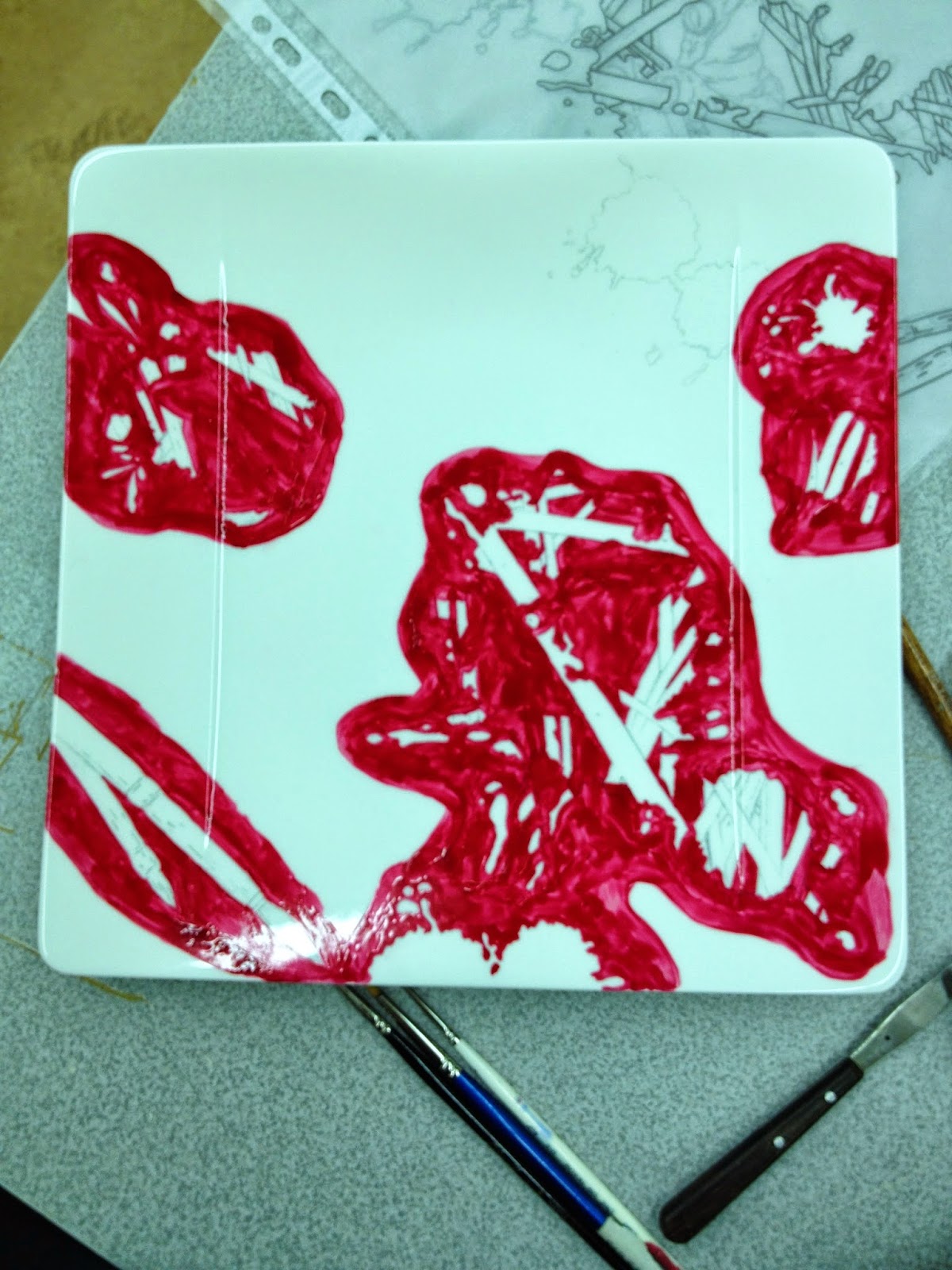 So, here's my plate with the red resist on.

Oh, you'll notice there's different shaped plates. Mine is this square one. Yumiko used a different square one, but the other people in the seminar all used circular plates. So you'll see different shapes as I took pictures not just of mine (since I couldn't paint, mine was never finished). 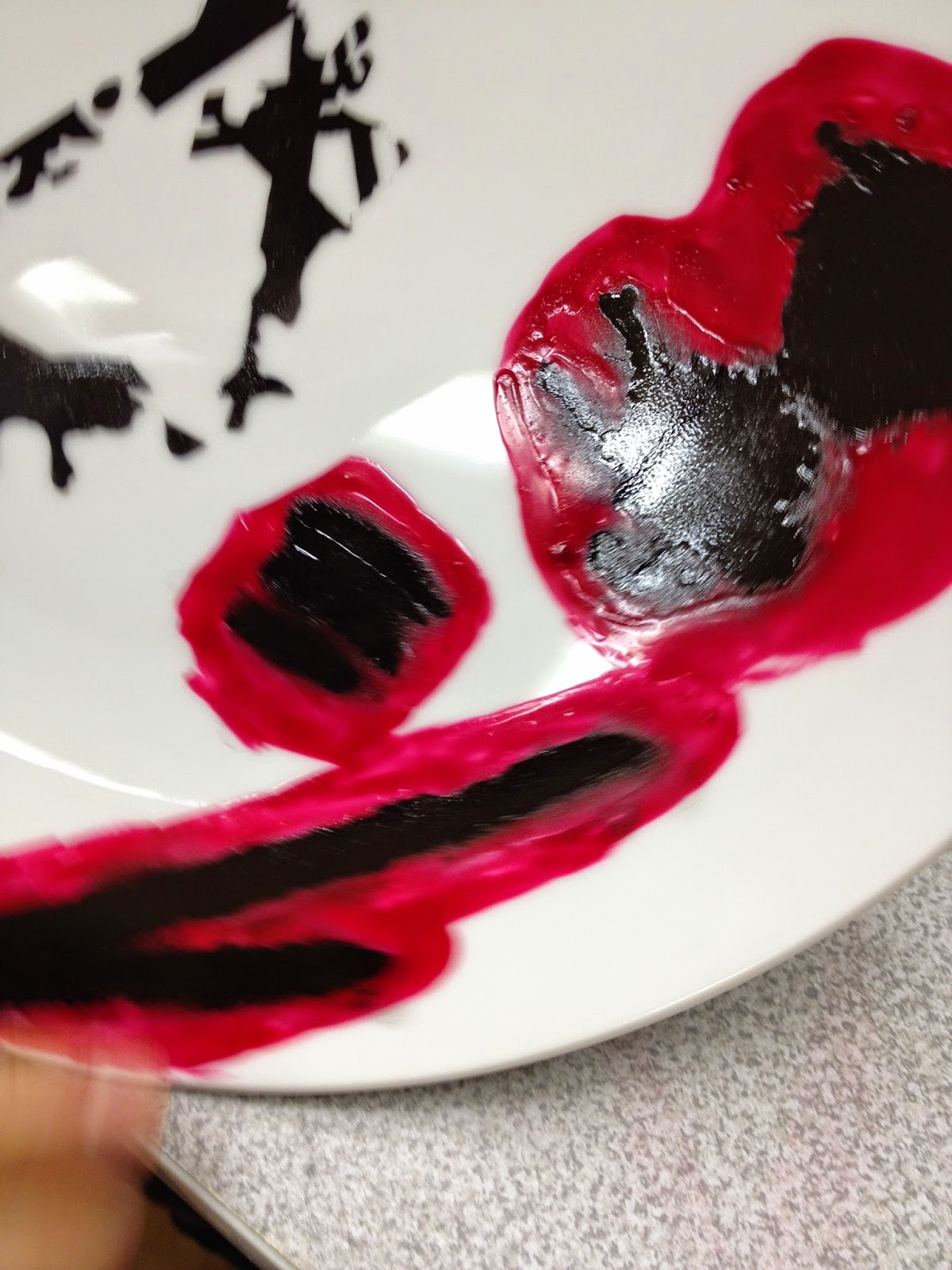 Now, here's the first layer of gold (yes, it goes on black since it's mixed with so many toxic things to keep it in a liquid state). I could do this as well, since you basically just paint it on within the red resisted areas (fine to do left handed), and then blot it carefully with a sponge (also okay to do left handed). I took this photo at this weird angle so I could see the amount of light on the gold... because when you're working with it this way, the texture has to be really consistent so you know if there's full coverage, and to make sure there aren't bubbles. 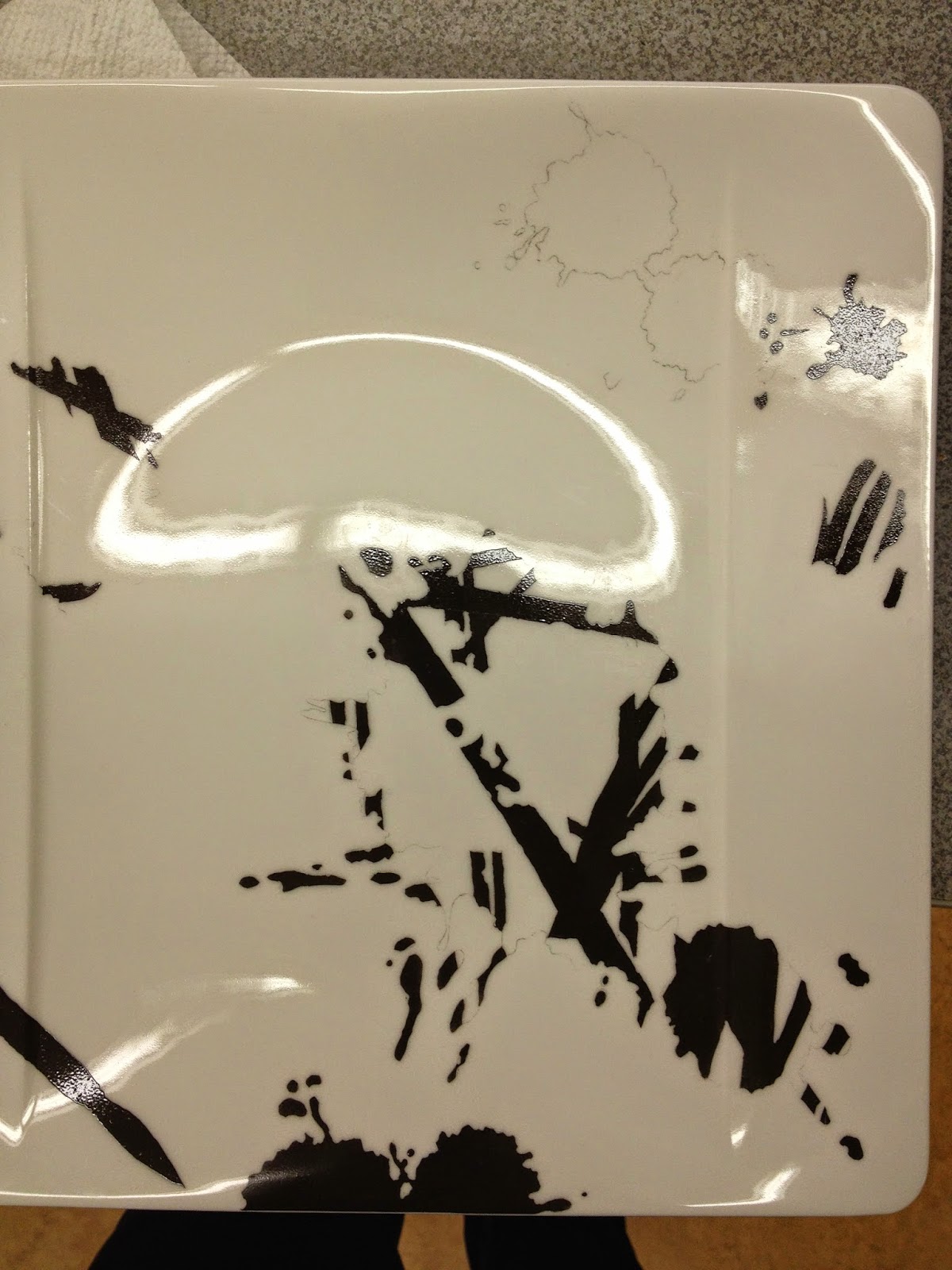 Then, when the gold has dried, you pull off the red resist. 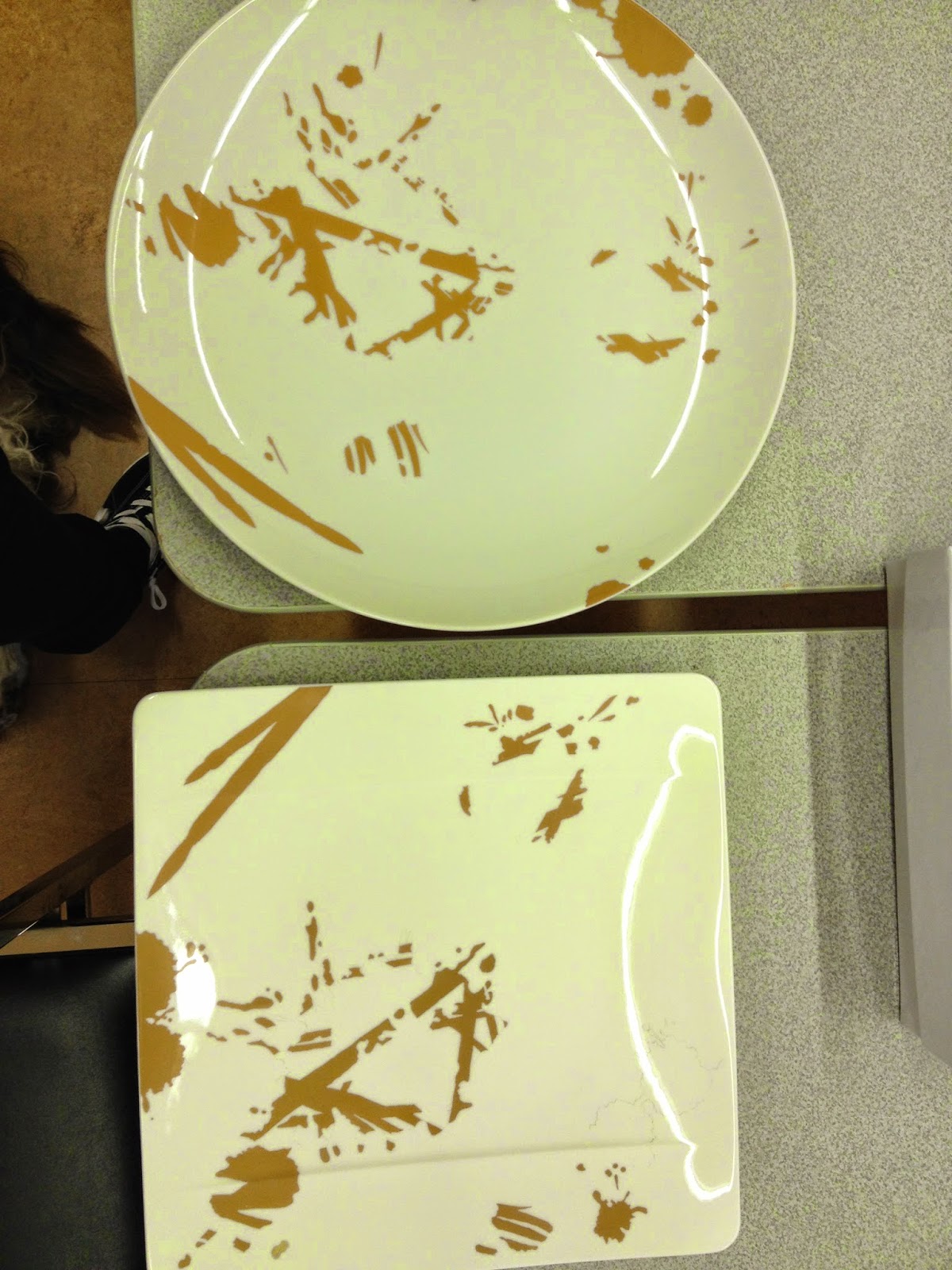 Unfortunately, there was a mishap with the gold... there are different kinds of gold.  Fluxed, which has (obviously) flux in it, and unfluxed. Flux makes gold, or paint, stick into the glaze... if you are painting gold on top of paint (like you normally do), you often use unfluxed because the paint you're painting the gold on already has flux in it...

BUT, we accidentally used unfluxed gold... so it actually wiped off when we tried to burnish it.

We lost an entire day because everything had to be redone, and we did some things out of order to try to make up the lost time... 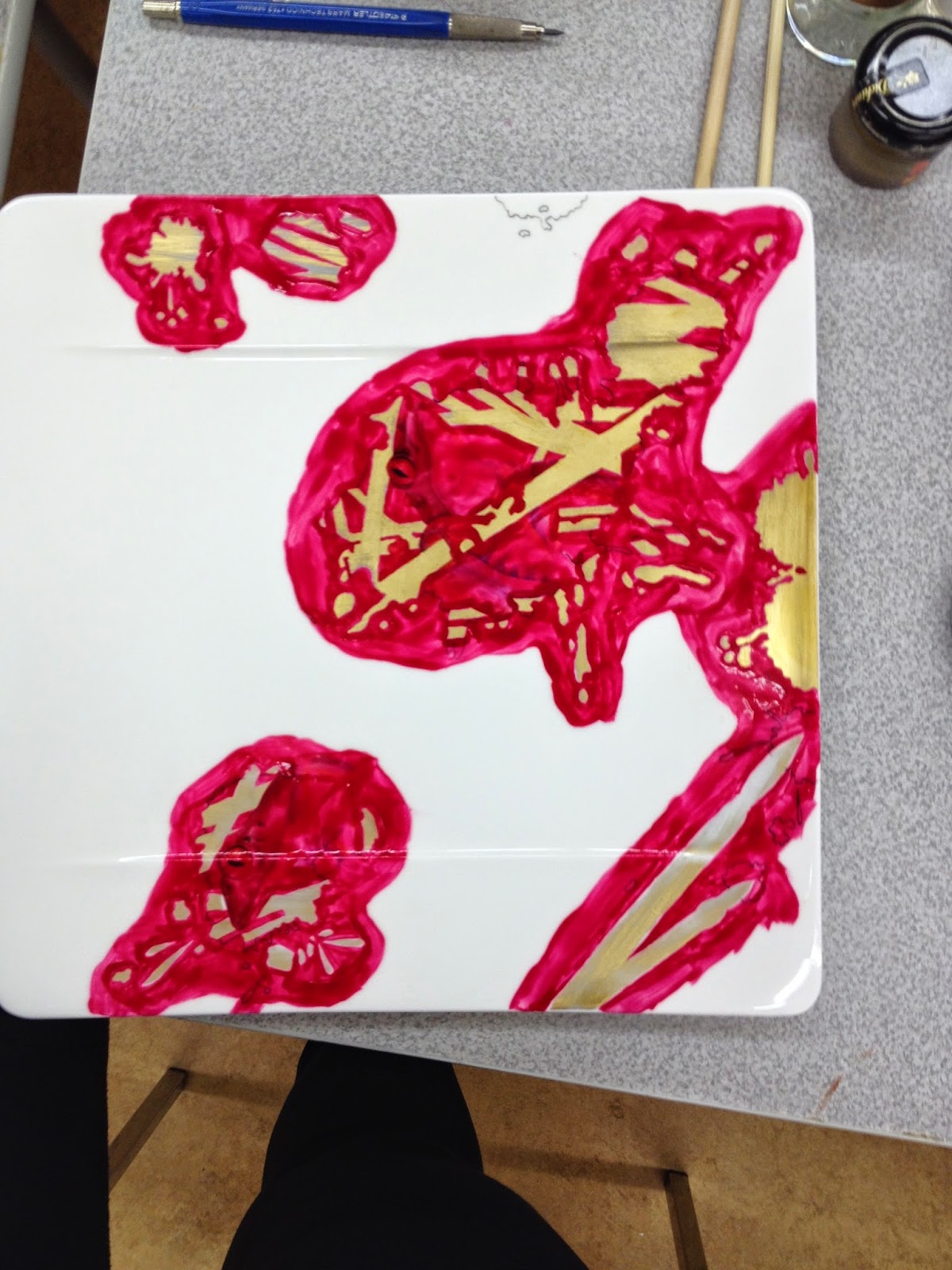 Then you do a second coat of red resist and gold. 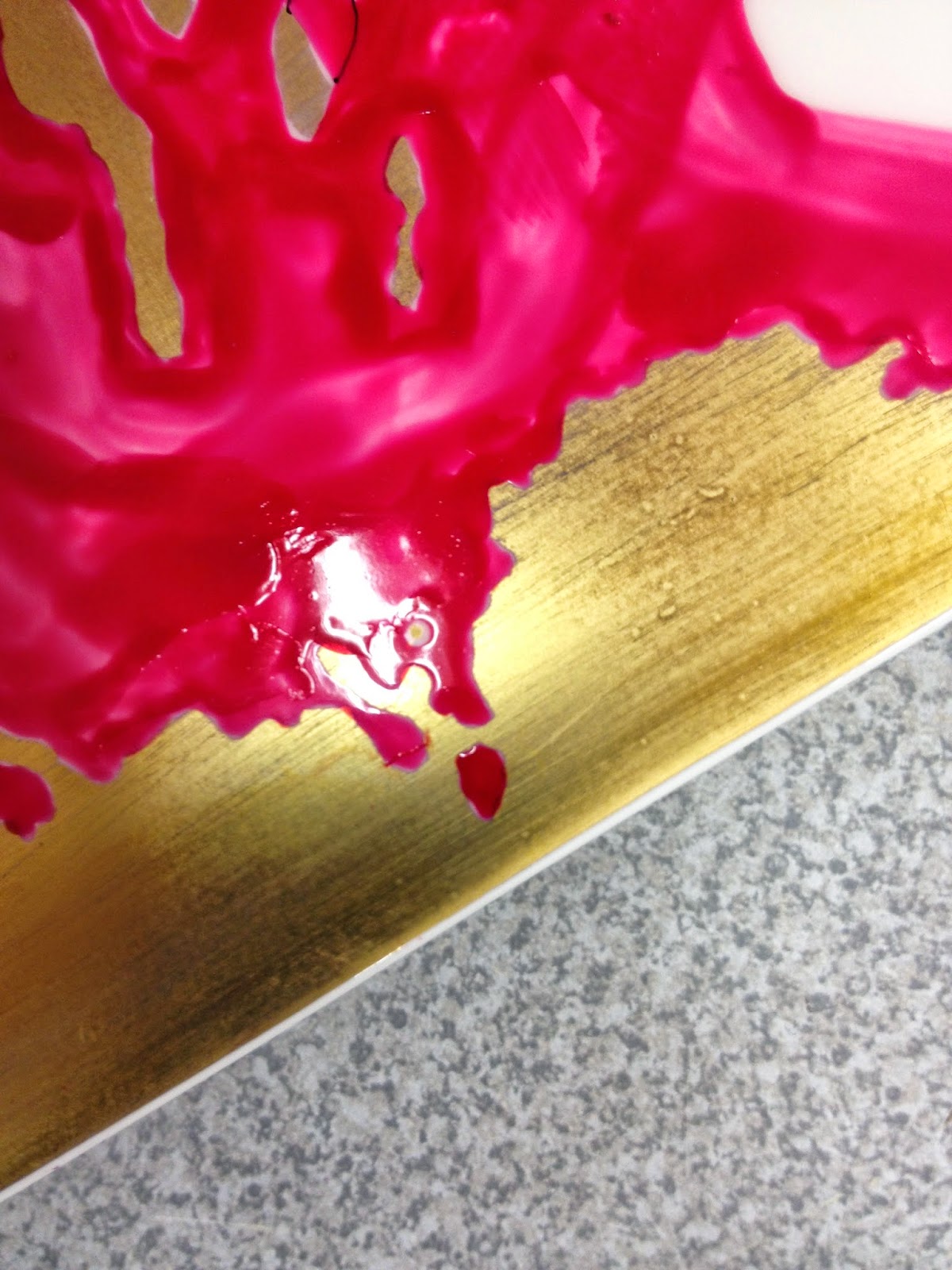 It's always a good idea to take a picture of the red resist BEFORE you put on the gold or other paint because, like this section with the tiny separate piece, once you paint over top, it's easy to forget that little bit is on there, and if you forget to take it off and put it in the kiln... it makes a big mess that cannot be fixed. 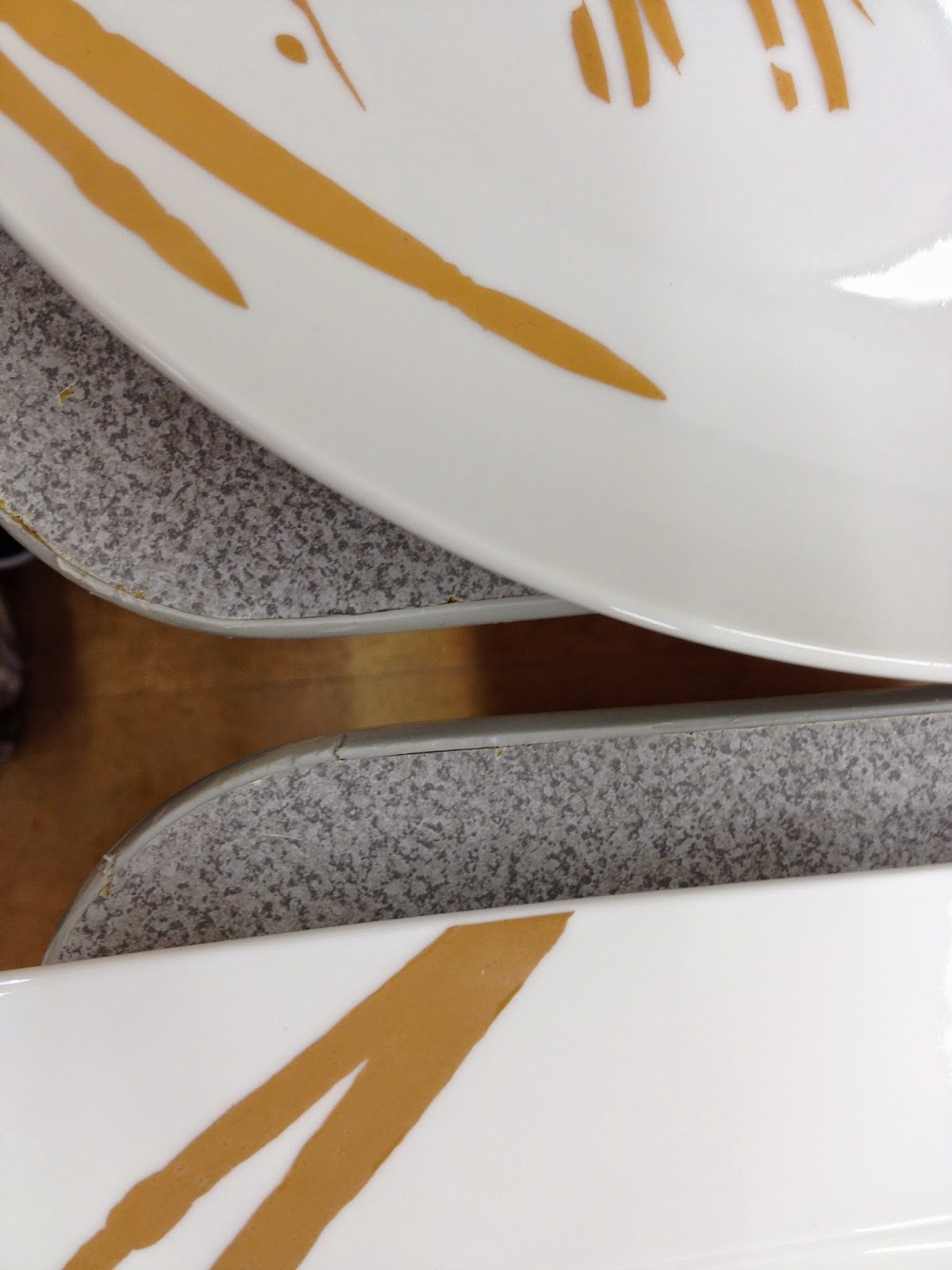 Okay, so burnishing... this is what the gold looks like immediately out of the kiln. Dull, eh? And not really pretty? That's 'cause it hasn't been burnished yet. Some gold you don't have to burnish, depends on what kind of look you want. 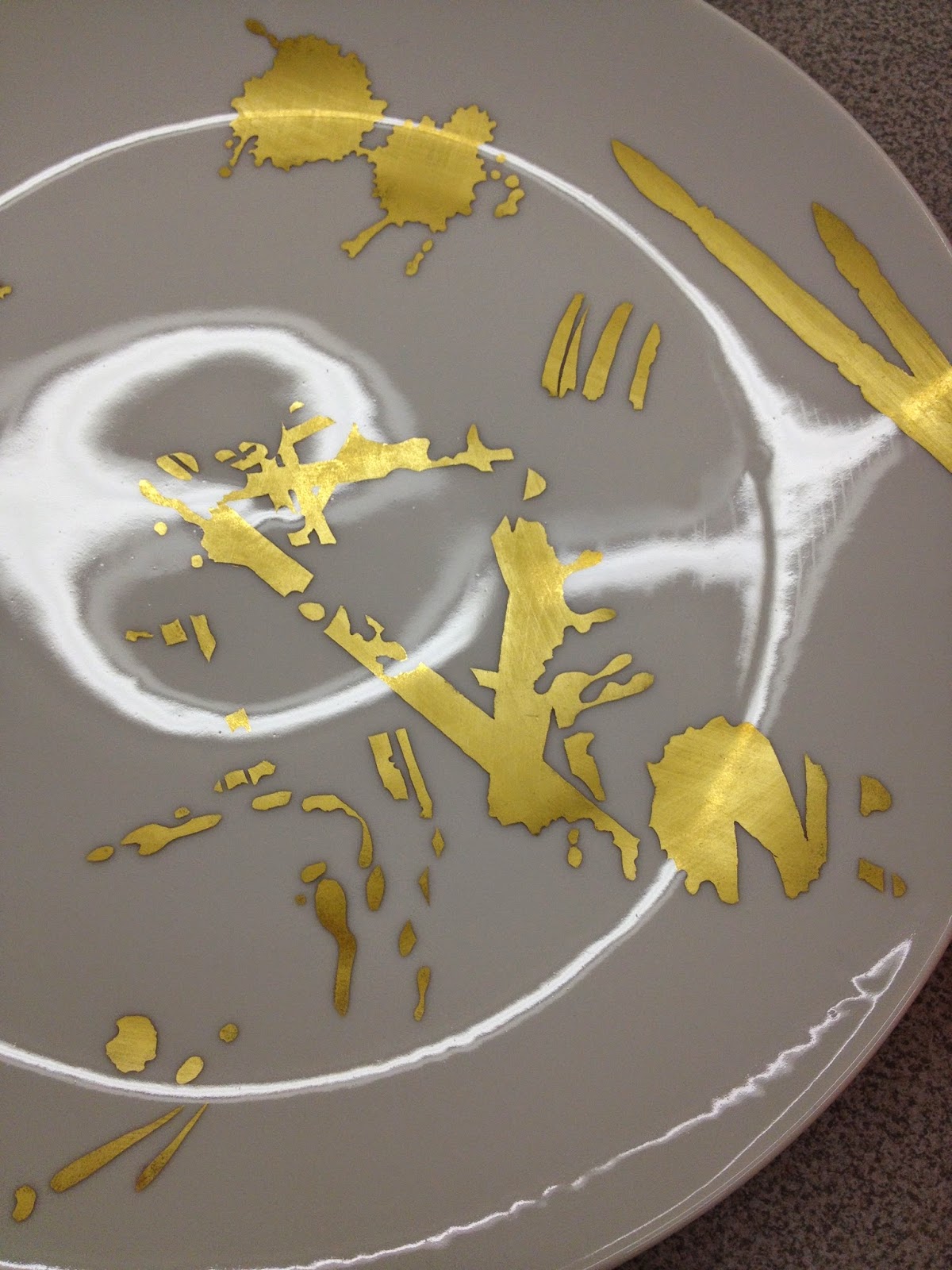 The gold in this picture is... half burnished. See how the light catches it? See all the little lines in it and cloudy verses bright gold?

OKAY, in the next few pictures, IGNORE when you see unfired gold (the black stuff) on the bamboo. Since we lost that day because of the gold mix-up, some of the seminar students started working on the frogs before putting on a second coat of gold, and did that later... but really, they're supposed to be on first... this was just so everyone could see/learn in the allotted time, and since the teacher was flying back to Italy, it's not like there was a way to extend by a day, or even by a few hours. 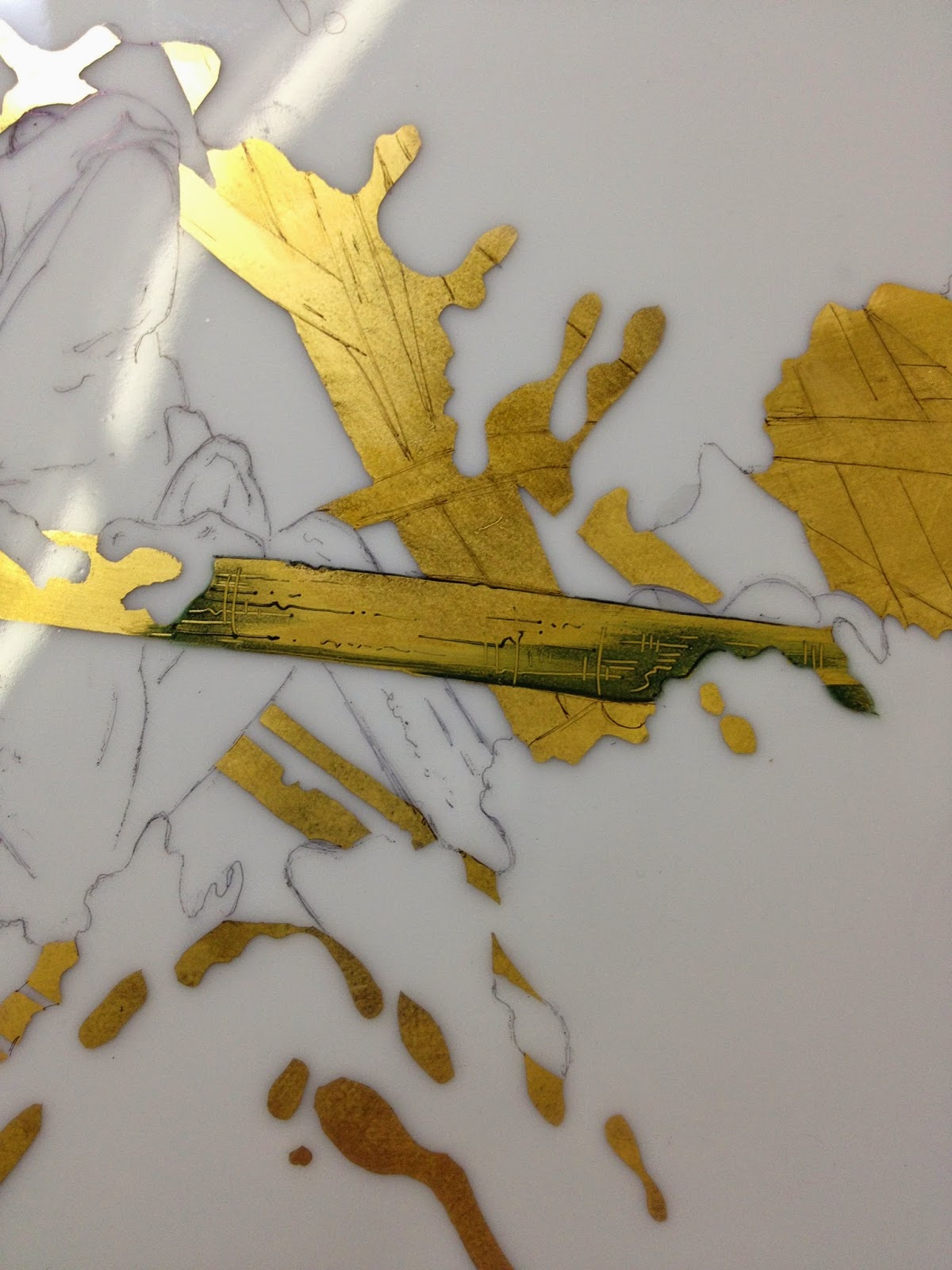 So, there were three different stages of painting on top of the gold. For each firing, about 25% of the paint colour gets absorbed into the gold and disappears, so you have to paint the colours on darker than you actually want the end result to be. 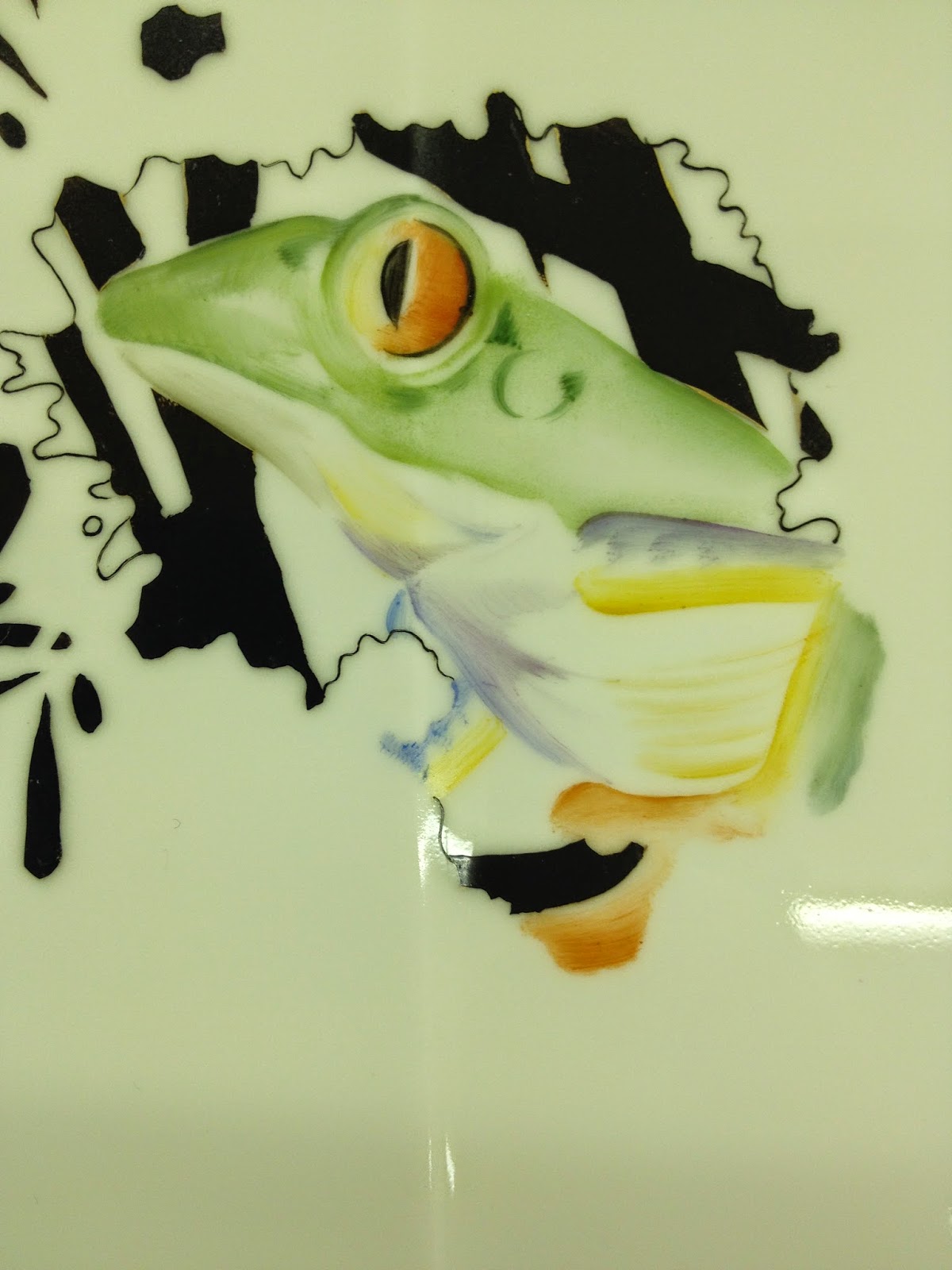 This is what the first layer of colour for the frog looks like... 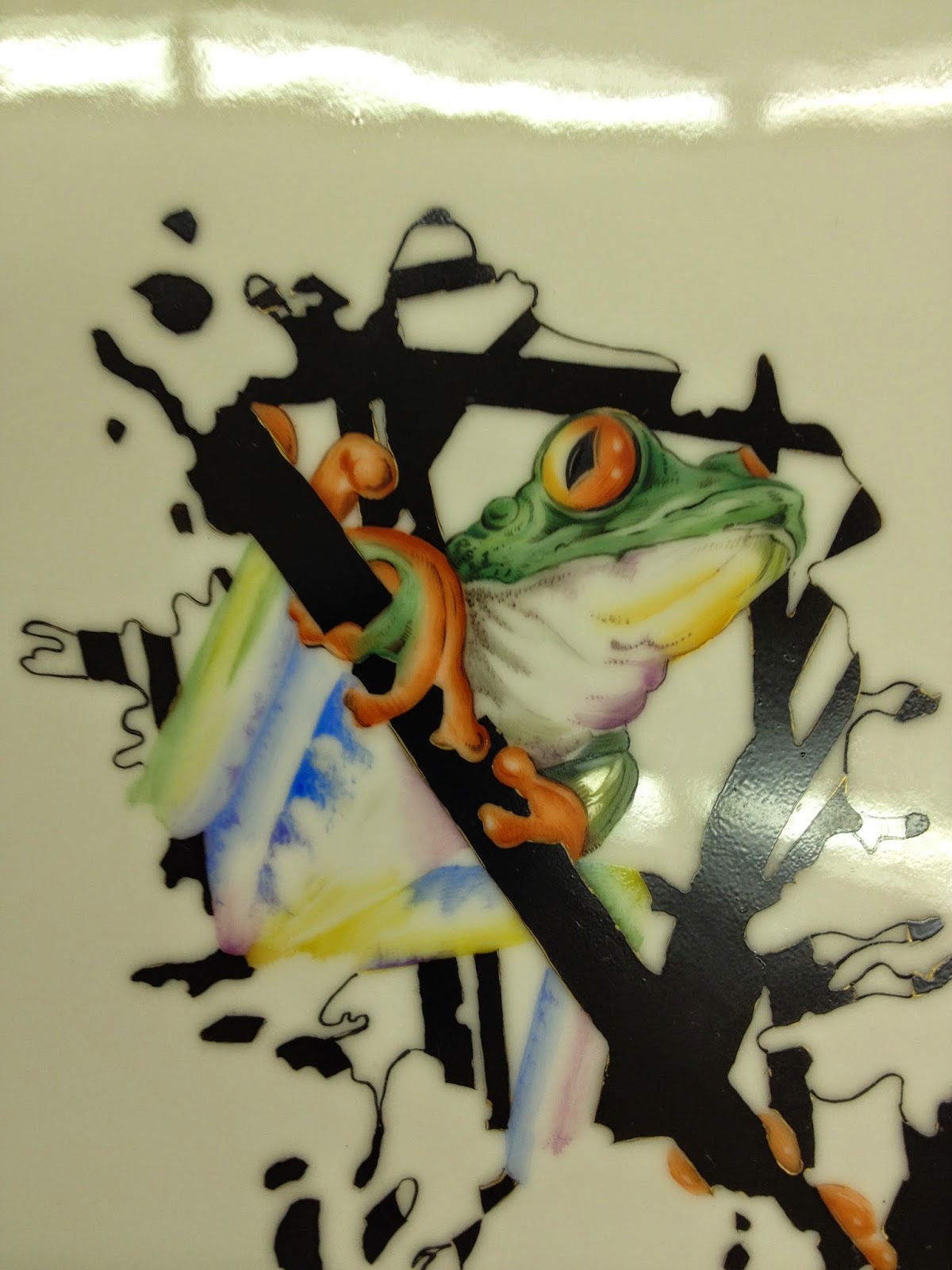 And here you can see first layer (bottom half of the frog) and the beginning of the second layer (top of the frog). Depending on the medium (the liquid you mix with the dry/powdered paint), the paint can dry, or it will never dry. Patrizia uses a closed-medium, which means the paint will dry and you can paint over it before you fire. Open or closed medium is determined by the type of oil you mix into the paint. 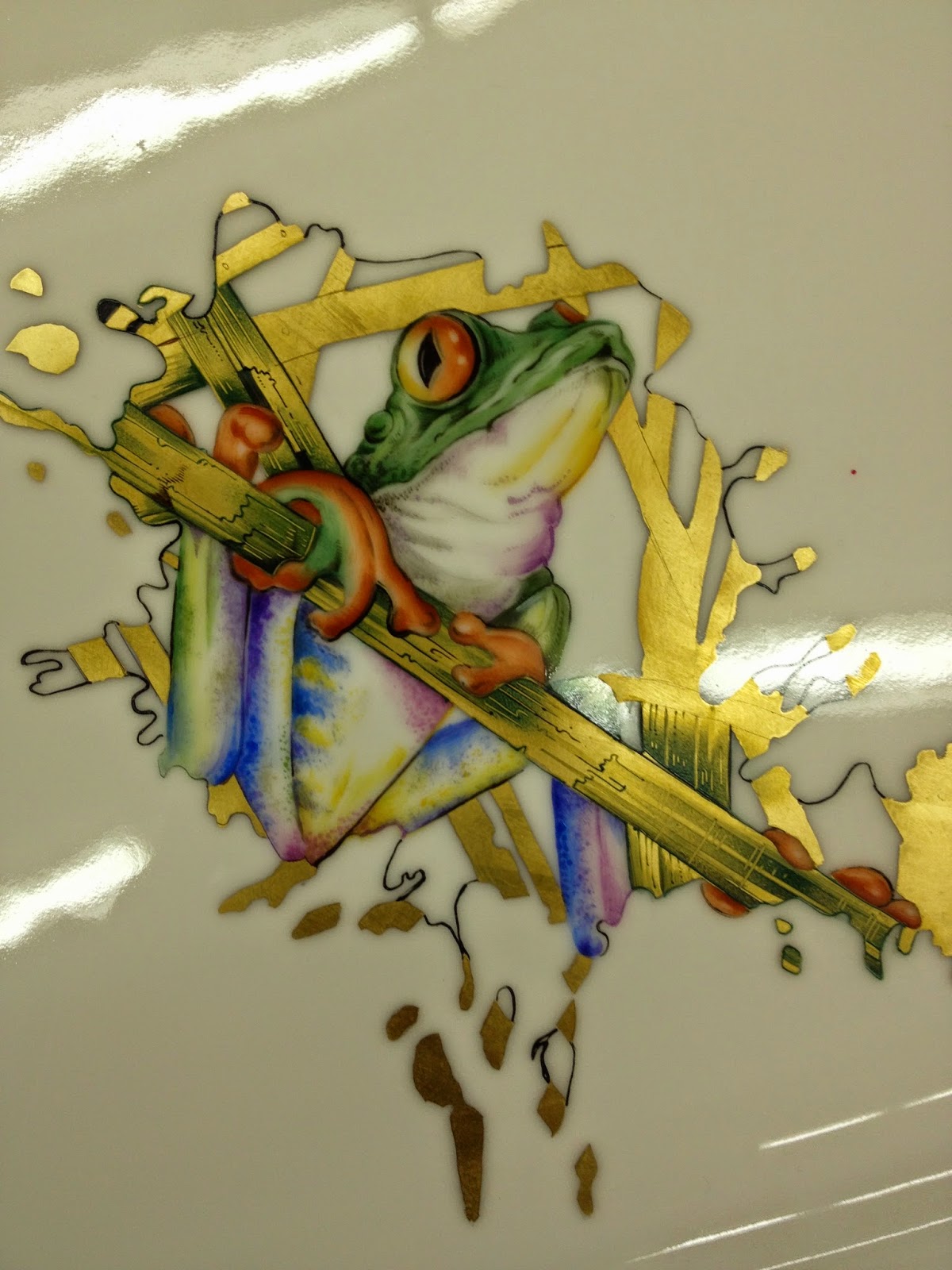 Here's someone else's second-layer frog with the first layer of bamboo painting on. 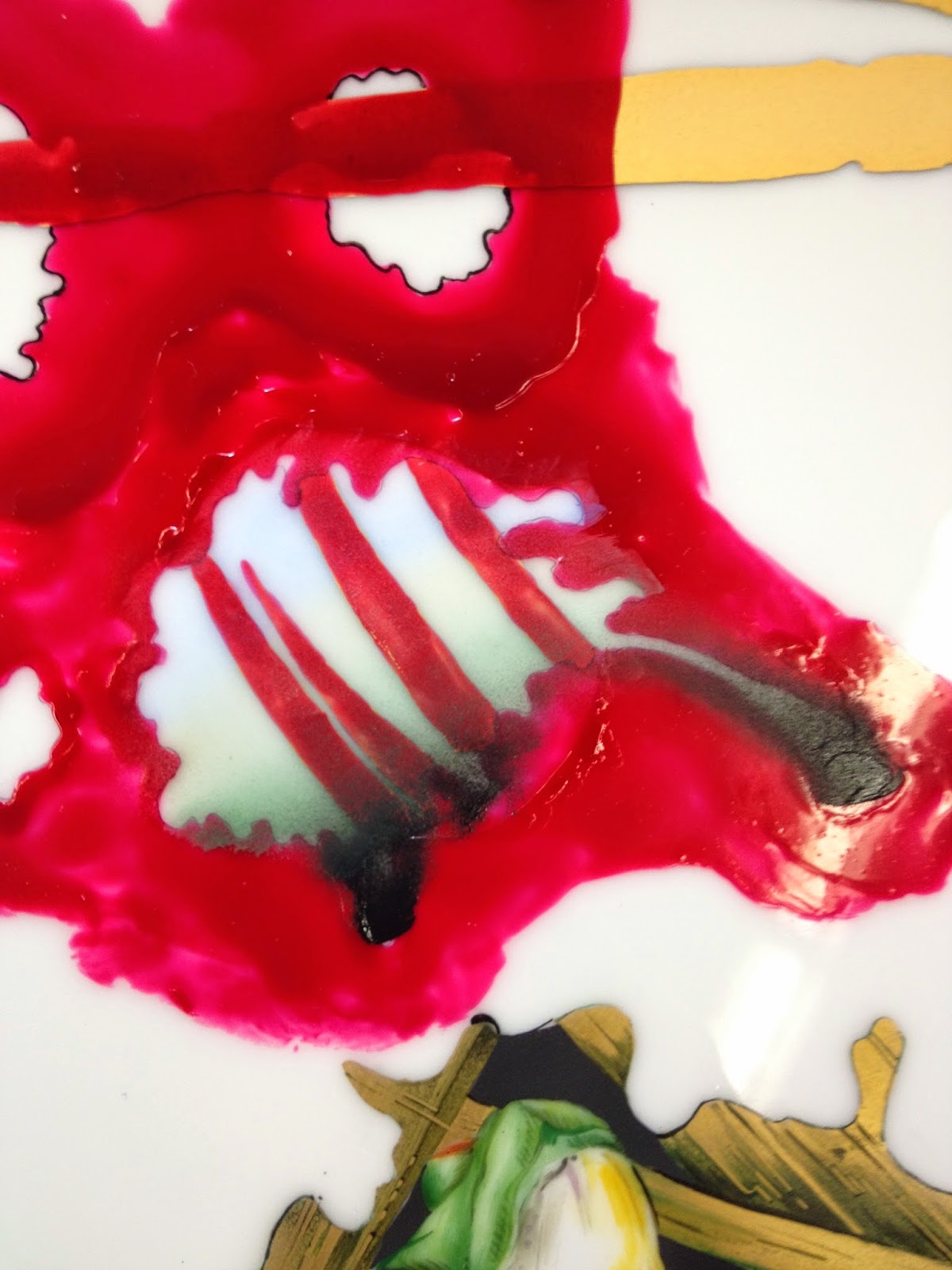 Here's the red resisted, and painted (before being fired) sky/background splatter 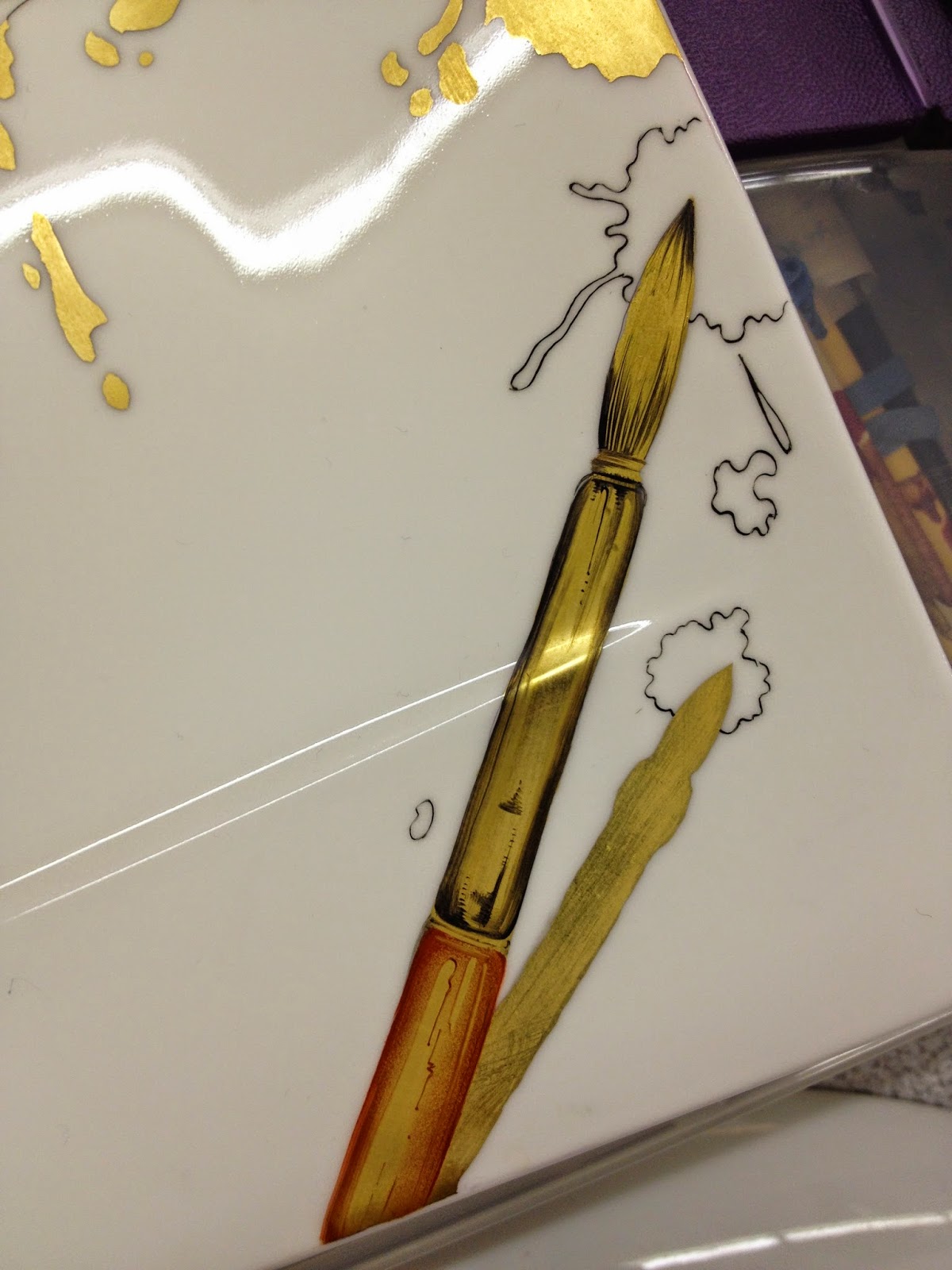 And here's the first layer of the paint brushes... 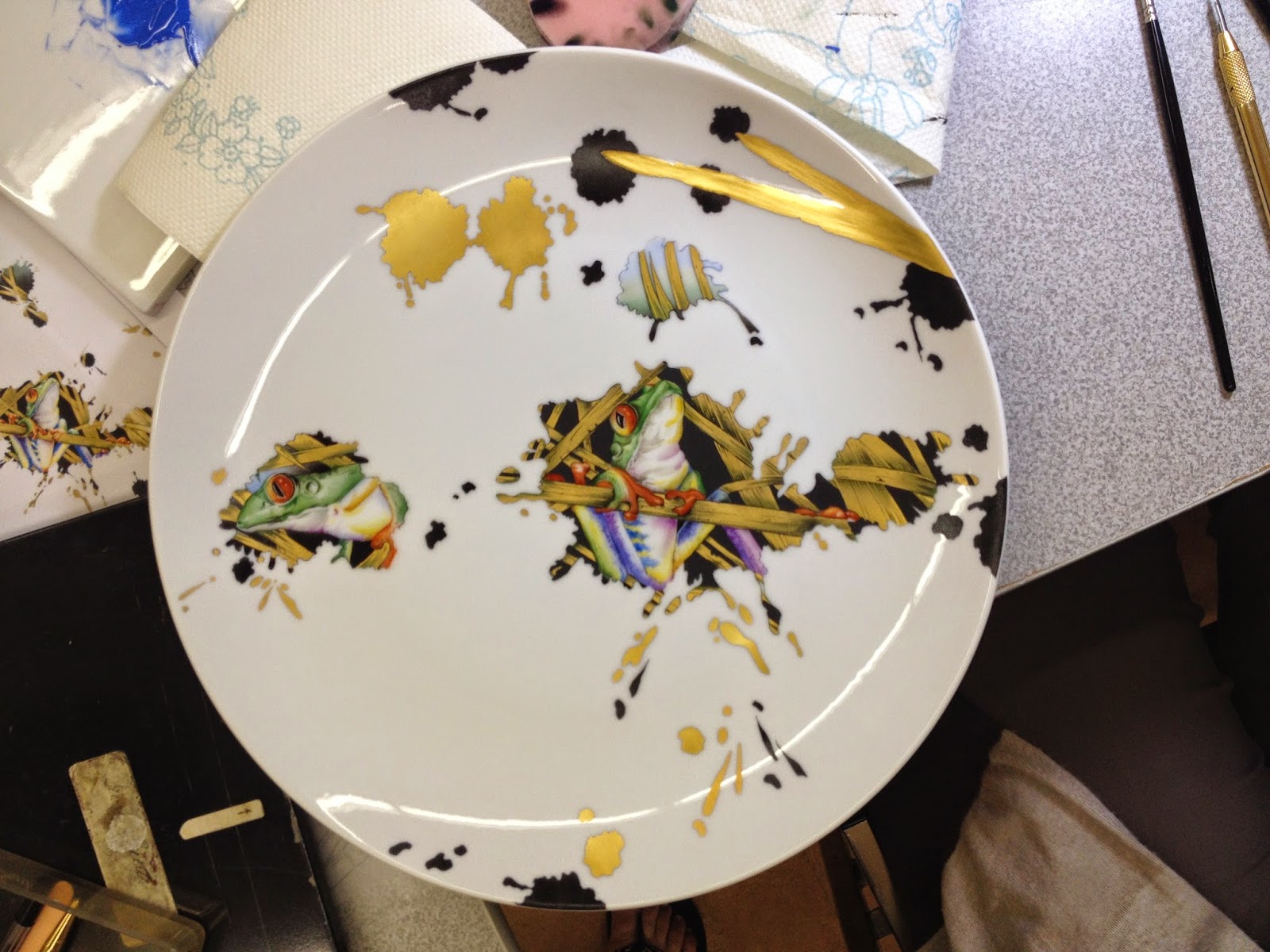 This is the one that was nearly finished... you can see the colour on the paint brushes hasn't been done yet.

I really encourage you to click on the photo and look at the details.

Unfortunately, that was the last picture I took... BUT, I watched closely, and several students took videos with their iPads/phones, and someone compiled them all onto a flash drive for everyone to have a copy, which was above-and-beyond nice...

Learning from Patrizia was amazing. Even though, when everyone heard I wasn't actually able to paint, they all said, aww what a waste of (time/money/etc), it was still an absolutely invaluable experience for me.

I loved it, and I would love to take another seminar with her in the future.
Posted by 1000th.monkey at 10:21 AM