Physio on my shoulder is going well, the nerves are less pinched, which means I am doing silly little sketches again as rehab.

Nothing spectacular, seriously, it still hurts to hold a pen/pencil longer than 10-20 minutes, but here are a few little sketches I spun out and gave a quick colouring job in Photoshop. 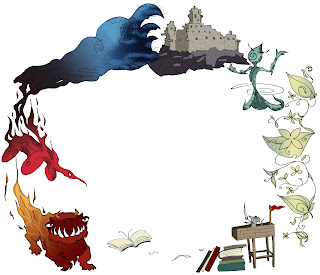 I don't know why, but when I'm doodling, it's usually odd little critters/beasts that come out... I think the fire dog-thingy is kinda cute :) He reminds me a bit of a French Bulldog. No idea what the dragon-morphing thing coming out of the cloud is, I was just randomly making curling shapes at the end of the wave that turned into a cloud that turned into... rain that turned into... a beastie. Yeah, no thought at all behind that one ;)

The green & yellow floral thing was a fast/simple design that I may want to put on baby-gift-related something-or-other in the future.

The green singer/castle/wave was sketched after I wrote this little bit of flash fiction and considered (for 5 minutes) of making a short graphic comic/story out of it. I still might, one day.

The mouse... yeah, y'know when I was playing around with creating designs for (potentially) an interactive/app-type kids book? I've got a rough script for a mouse story in my head as well, essentially two mice 'fighting' each other with imagination.

Anyways, nothing I spent a lot of time on, but it's nice to hold a pencil again (for short spurts), even if my control still sucks too much to even consider picking up a paint brush :)

...good thing this old soccer injury/pinched-nerve thing doesn't affect typing skills or I would be absolutely insane by now with zero creative outlets...
Posted by 1000th.monkey at 11:53 AM No comments:

Wow, I stumbled across this interesting artist a few days ago...

A quick definition via the Free Dictionary:

n.
1. A condition in which one type of stimulation evokes the sensation of another, as when the hearingof a sound produces the visualization of a color.
2. A sensation felt in one part of the body as a result of stimulus applied to another, as in referredpain.
3. The description of one kind of sense impression by using words that normally describe another.

So, this artist paints the colours she sees while listening to music.

Check out her site, not all are to my personal taste, but I would certainly love to hang a few of these on my wall...
Posted by 1000th.monkey at 11:17 AM No comments: