Okay, the convention is over, and now we're into the seminars... I'm going to post a few pics of the 'secret non-painting-project' I was worked on for the convention, and I'll post more of the actual displayed work/etc at the convention when I have time (as in, maybe not happen until June 3rd, when the final seminar is over and the artists have been taken to the airport). 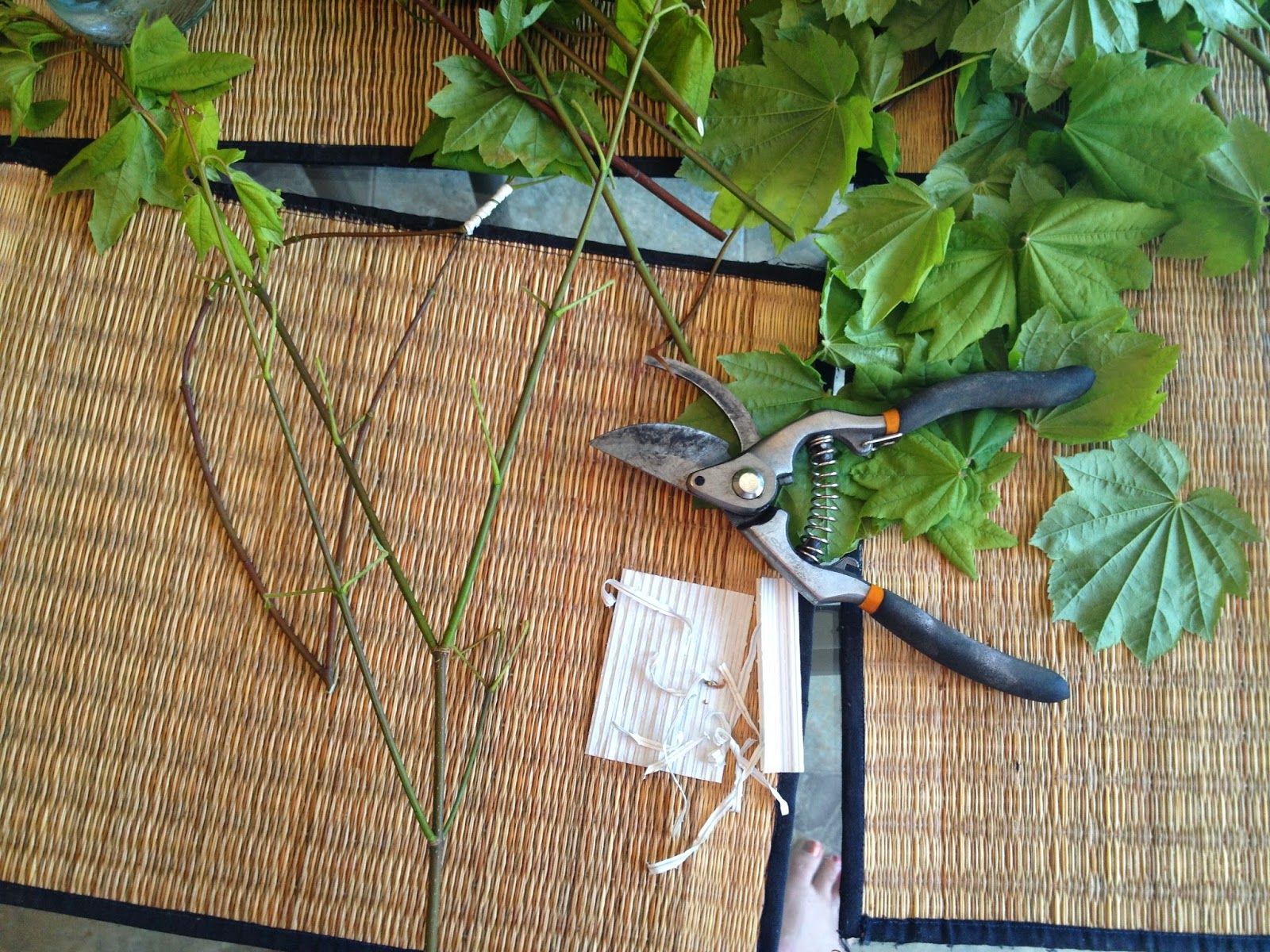 Please click on the pictures to see them at a larger size. 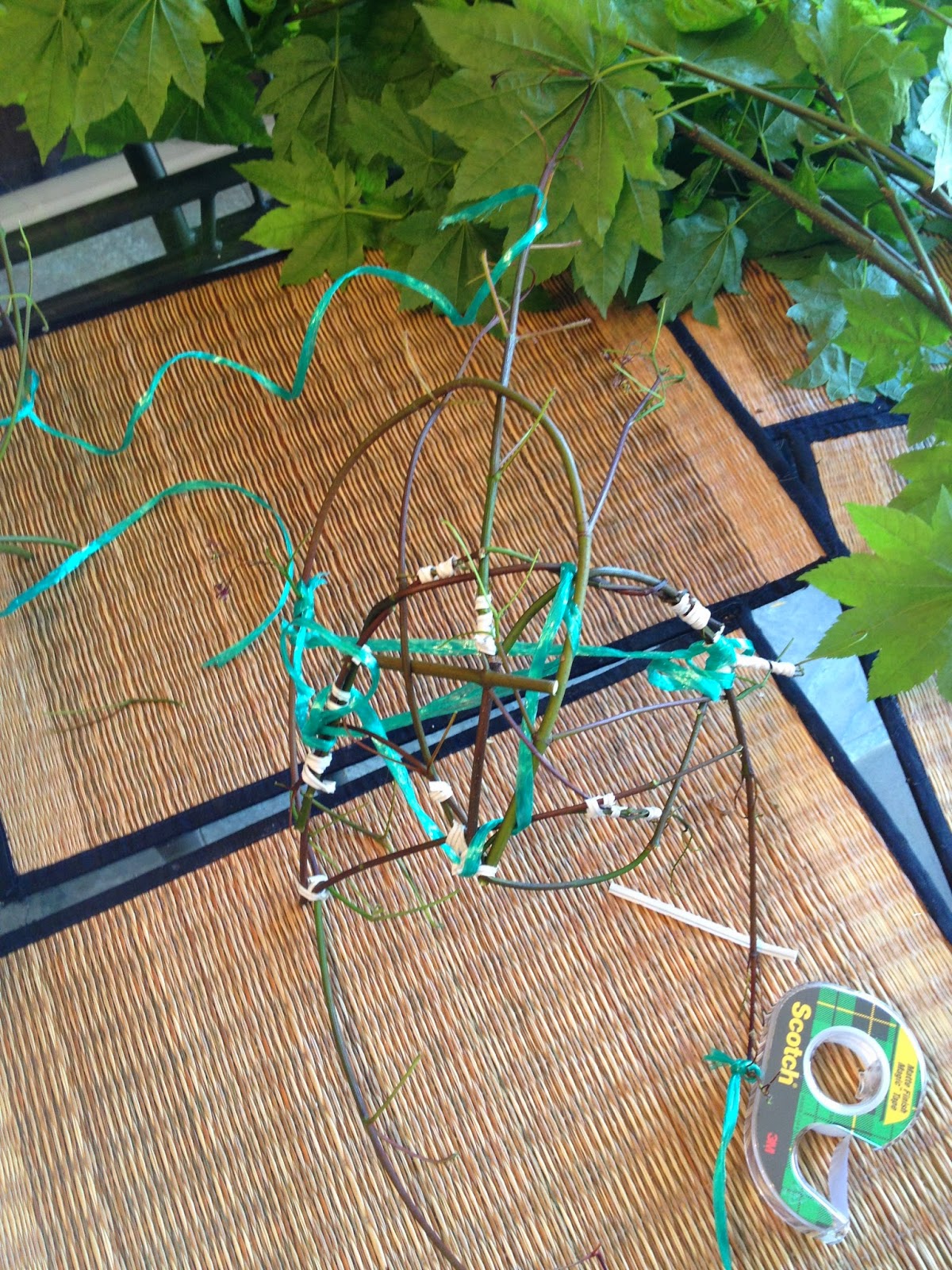 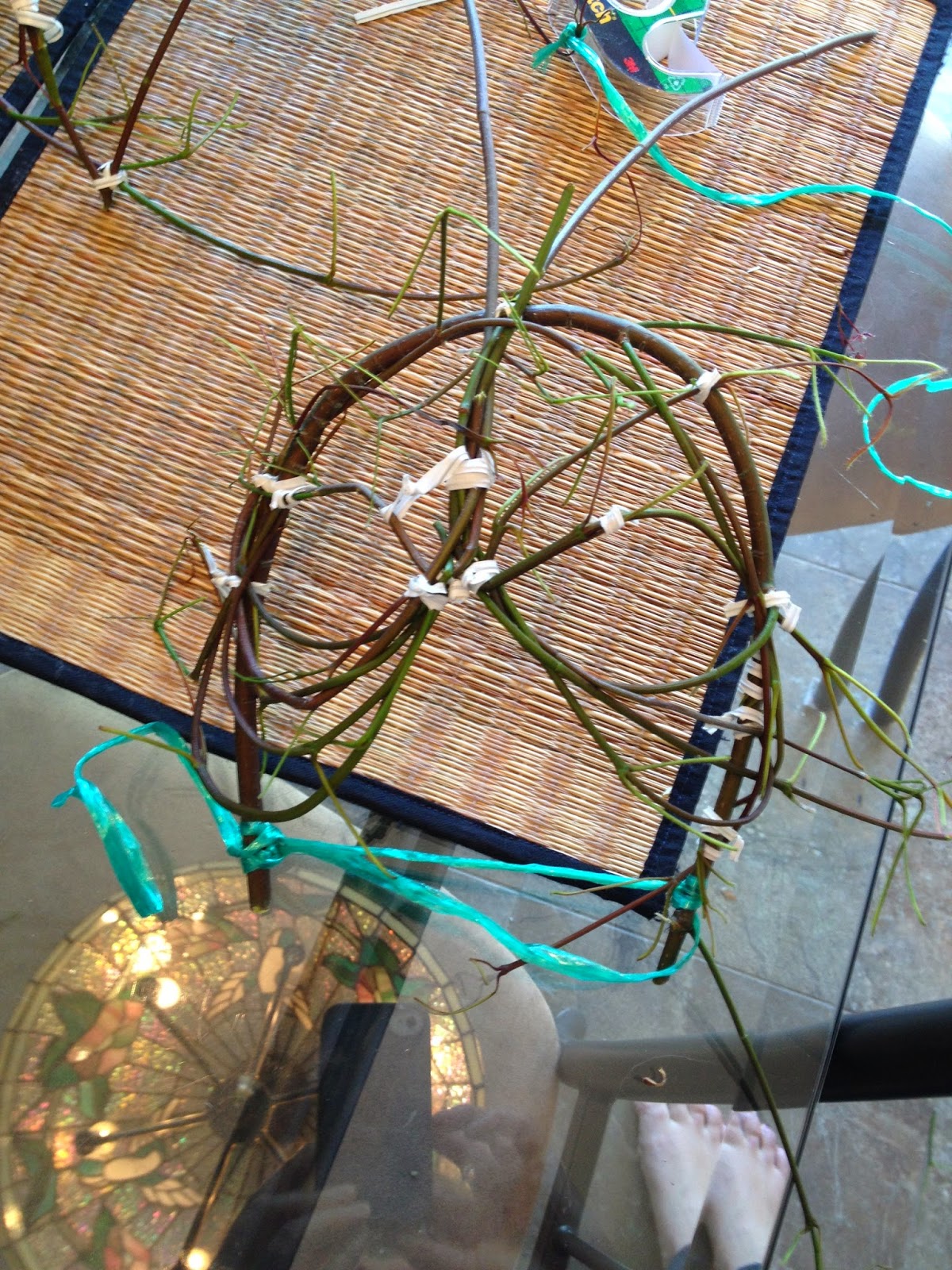 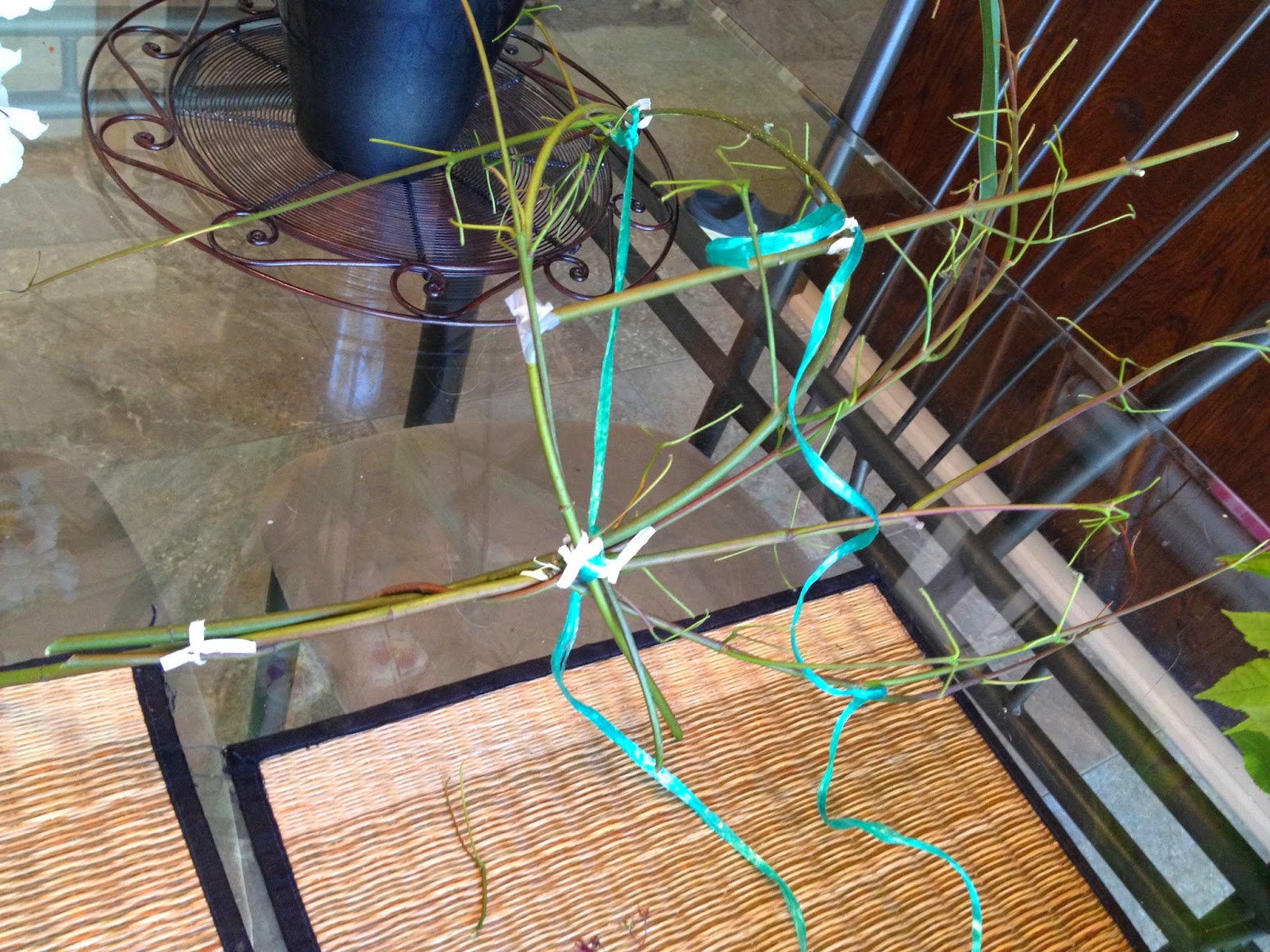 Can you guess? I made masks! There was a big gala dinner at the end of the convention, with a 'Phantom of the Opera' theme, so of course, everyone was supposed to dress up and wear a mask.

I've never done something like this before, but I've always had good spacial skills (perhaps it off-sets the dyslexia?) I can imagine something three-dimensional, and disassemble/reassemble it in my head even before I start working.

I created three different ones, just in case I broke/ruined one (or two, knowing me), so I wanted to make sure I had a spare.

To make these involved a lot of trial and error. Quickly, I realized I could only work for an hour or so, leave the twist ties on, and let it dry overnight, or over a couple nights before I could weave more twigs/branches into these. You'll also notice I removed all the leaves from the branches. That was the first learning phase. Trying to weave the branches with the leaves on quickly shredded the leaves and left clumps of them caught between, which was ugly and made it harder to work.


When the branches were relatively dried enough that I could remove some of the twist ties, step two looked like this: 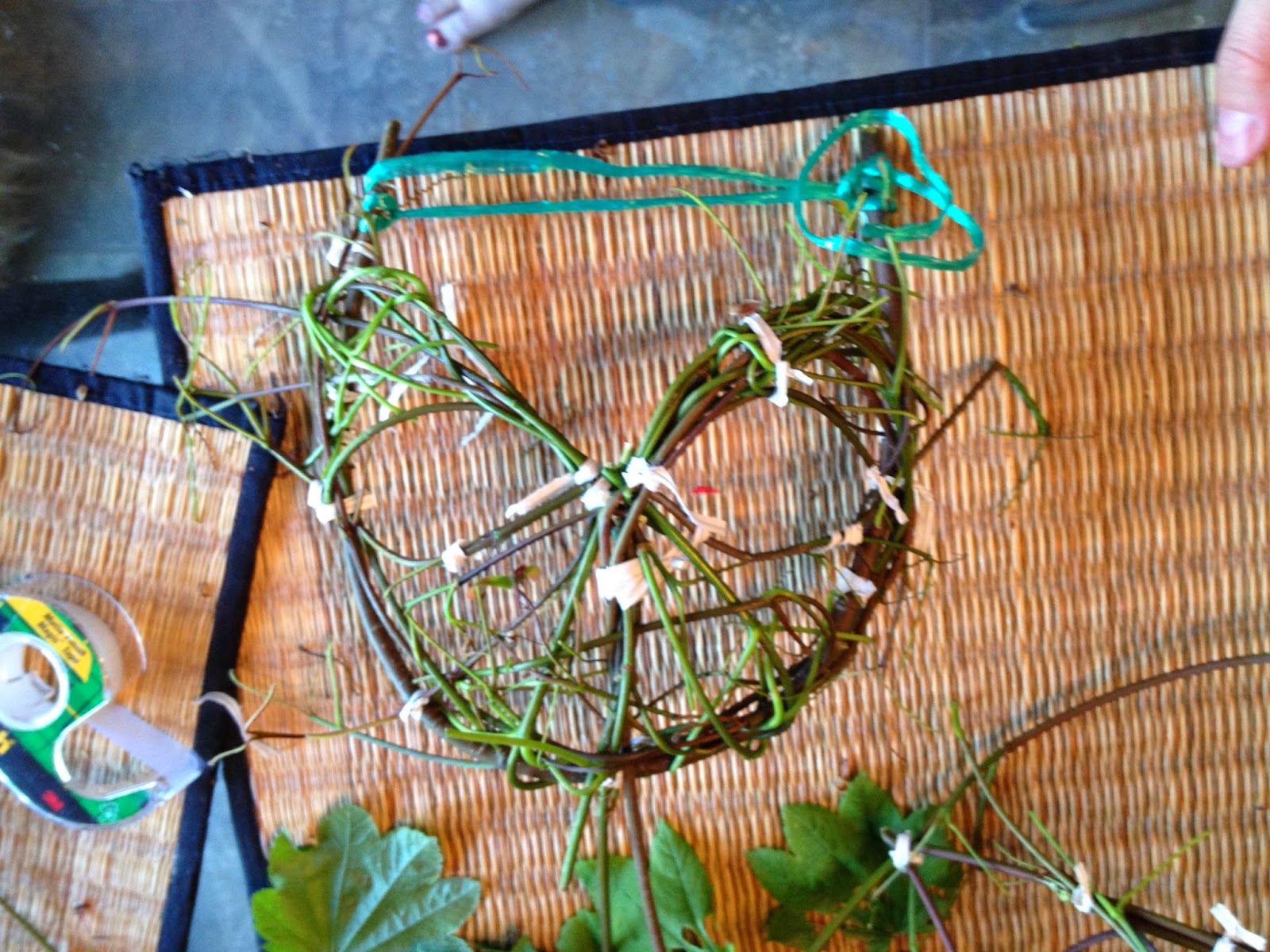 Sorry that first one is upside-down... 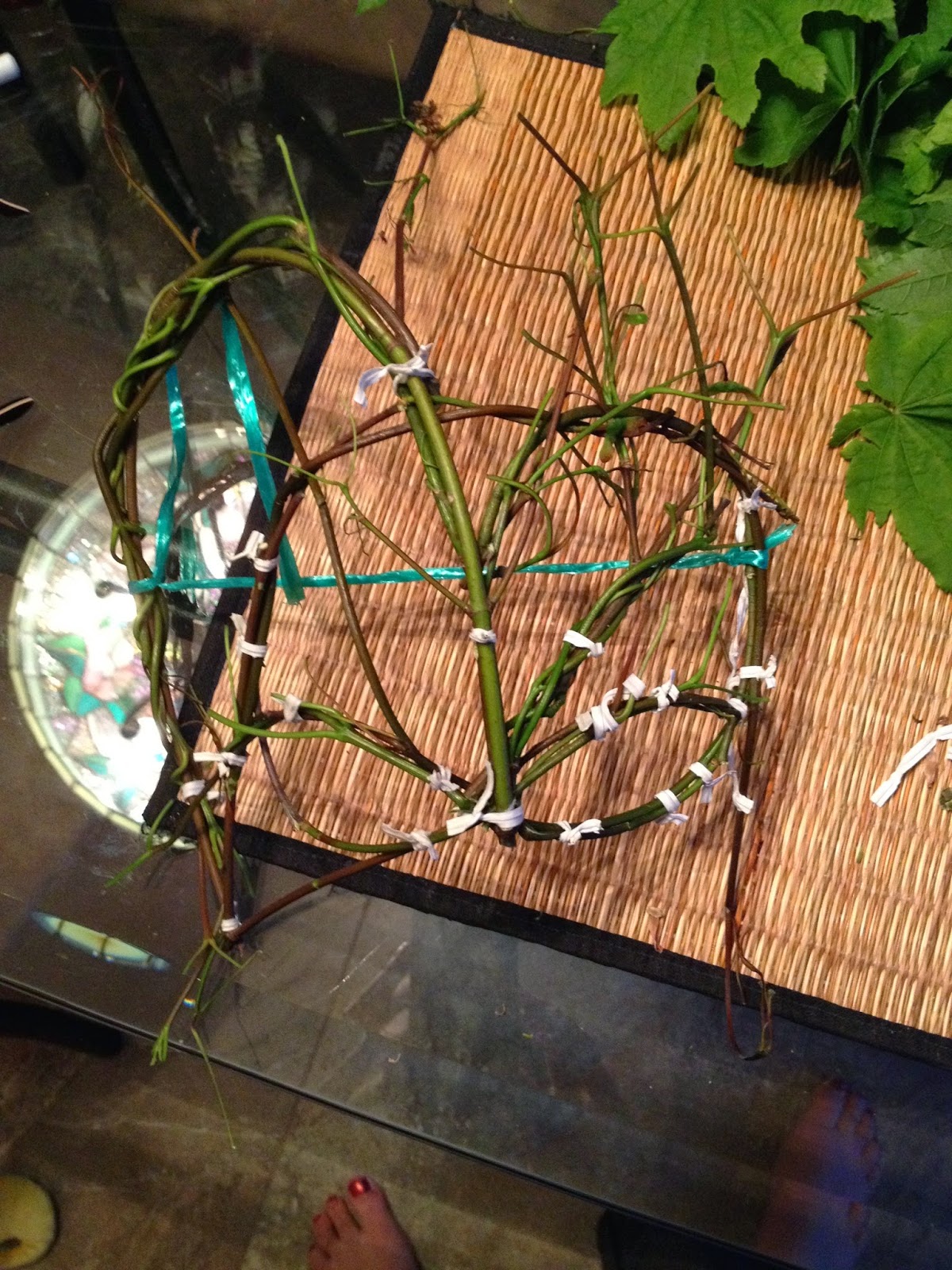 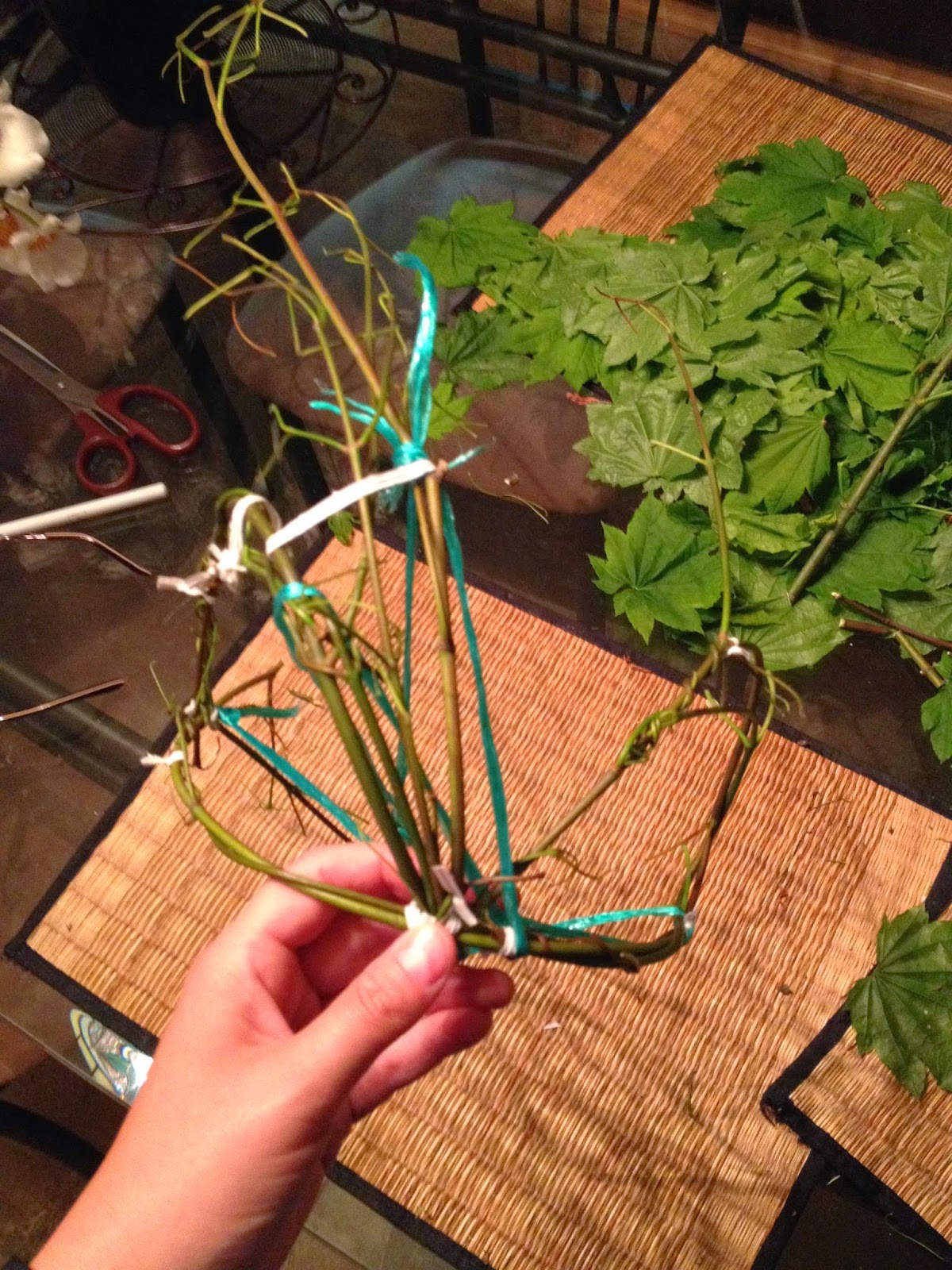 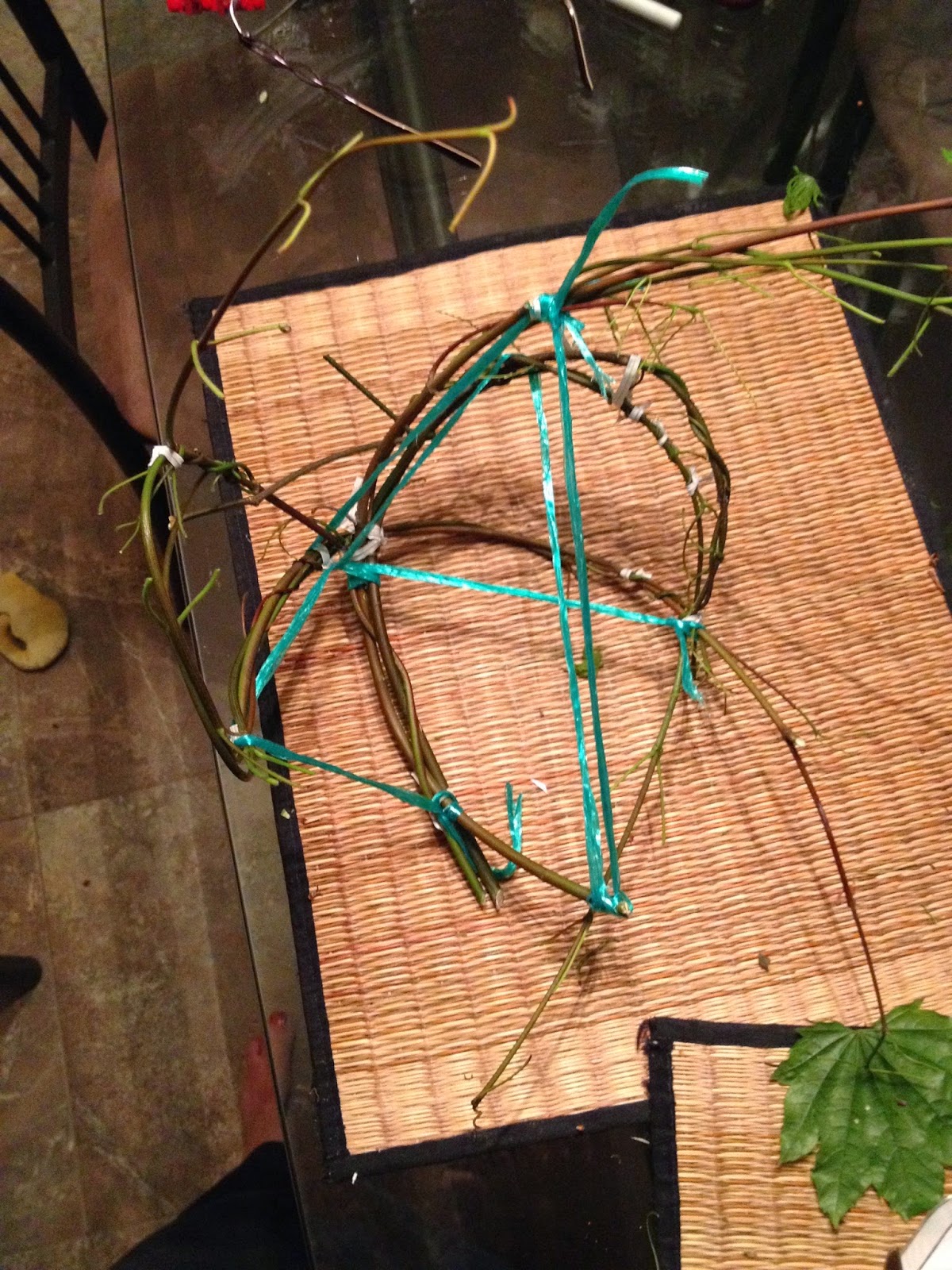 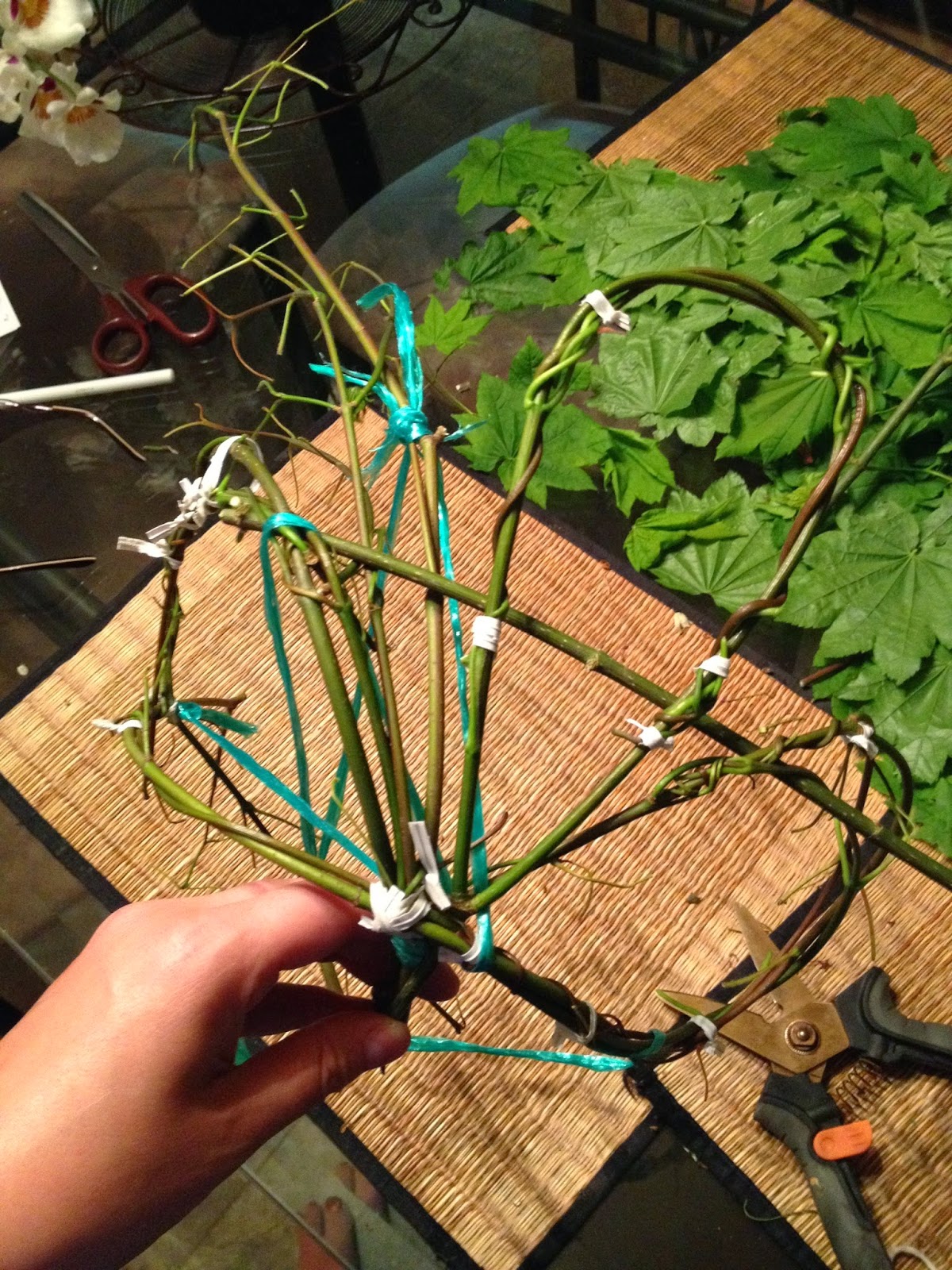 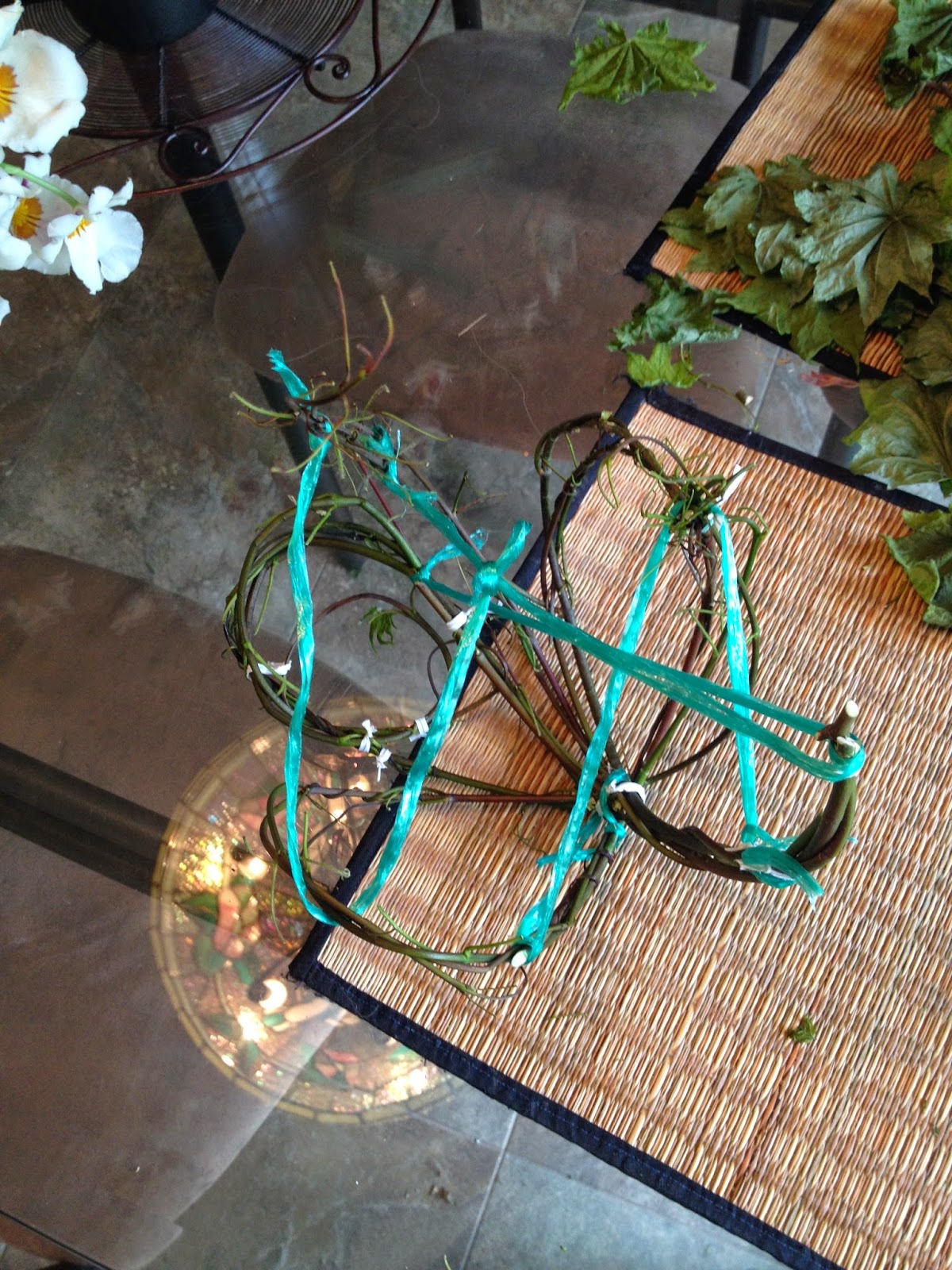 The green twine was used to bend them into shape -> since I didn't want them flat, I wanted them to curve around the face properly. The last four pictures are of the same mask at various bending-stages as this one was the most... expansive? (It was kinda shaped like a clover -> since I've got Irish heritage). It's also the only one I didn't finish.

This bending process took another couple of days, but by that, I still mean I worked on them for only about an hour or so, then had to leave them to dry. So it wasn't as time-consuming as it may seem. I worked on them in the evenings, usually after I'd been doing convention stuff all day.

I never actually took pictures during stage three... mostly 'cause the convention had already started, and I was literally coming back and working on them around 8pm at night after being up @ 5am and running around like crazy all day.

Step three involved resin. You basically have these two bottle and you mix equal parts into a plastic cup, then whip/mix it for a couple of minutes until it starts getting warm and sticky.

Then I used a paintbrush to coat the entire thing. Since there were still twist ties on many parts of the masks holding them together, I coated them over two days/evenings and let them dry in between. I then added real maple leaves and coated them in resin.

Stage four, I added the porcelain leaves and copper wire as accents. I did this... literally Friday night  (the day before the dinner) at around 11pm, and I was so exhausted that I finished one, threw some porcelain leaves randomly on the second mask, and abandoned the third (which is why I never finished it). 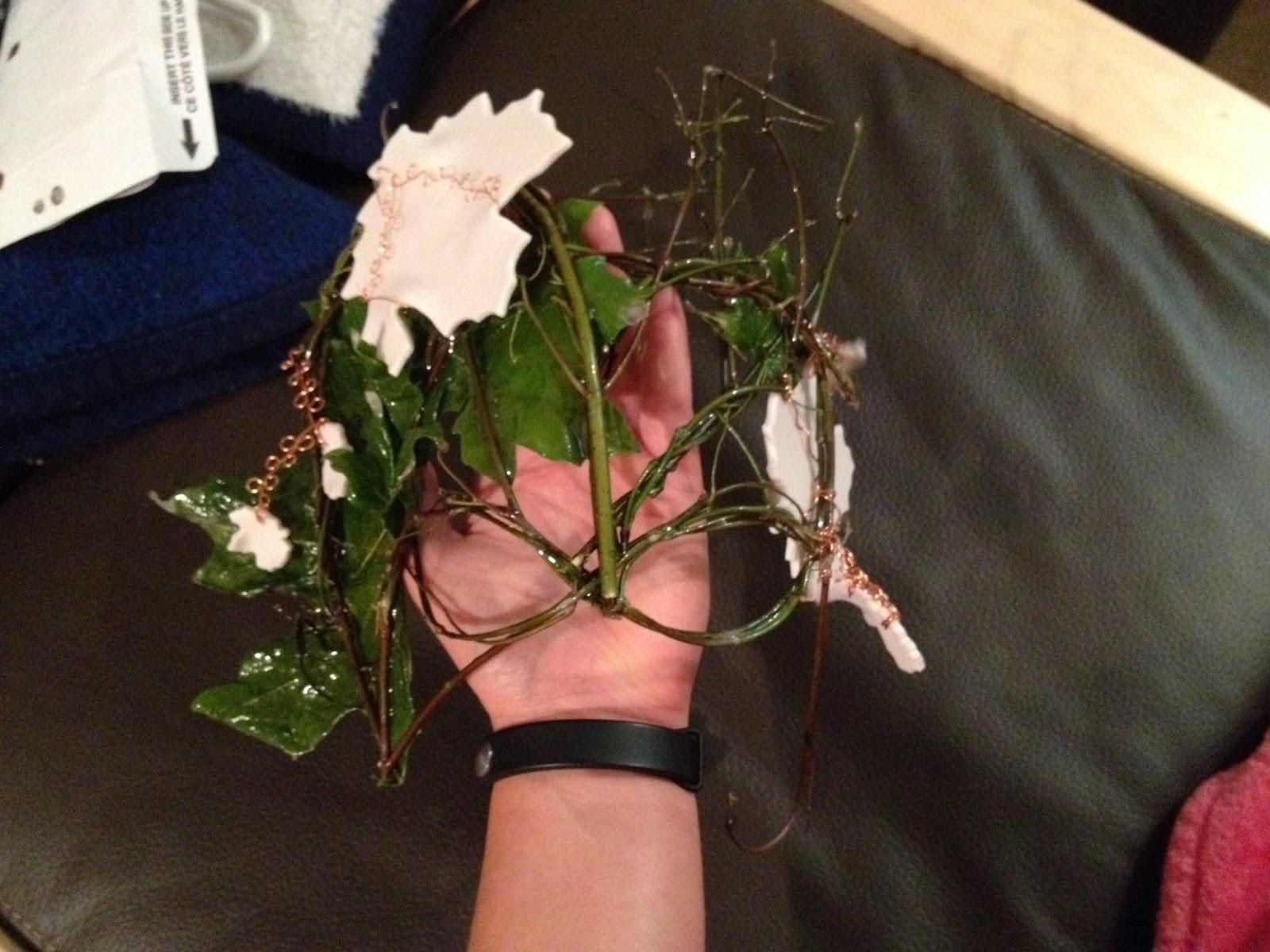 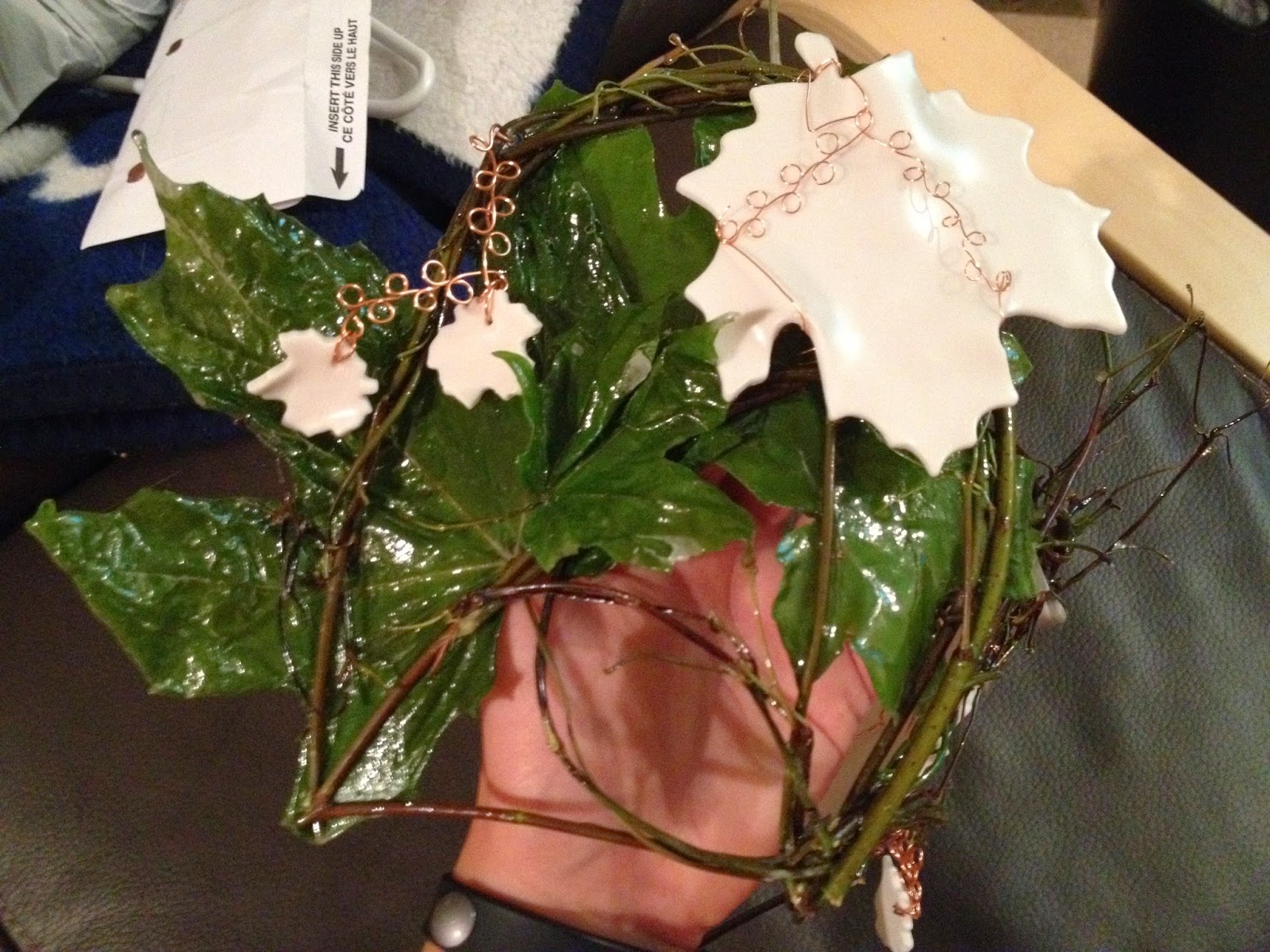 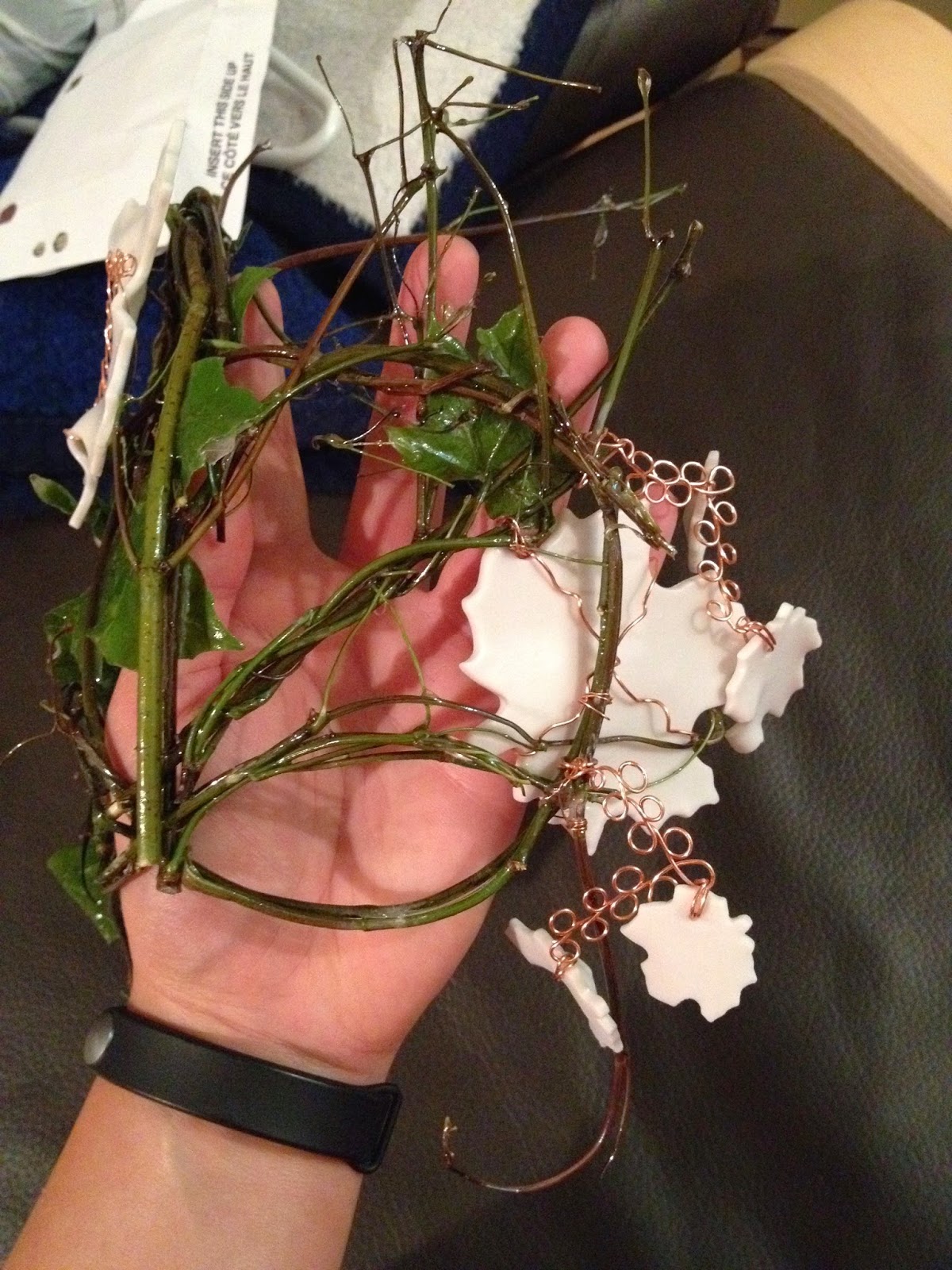 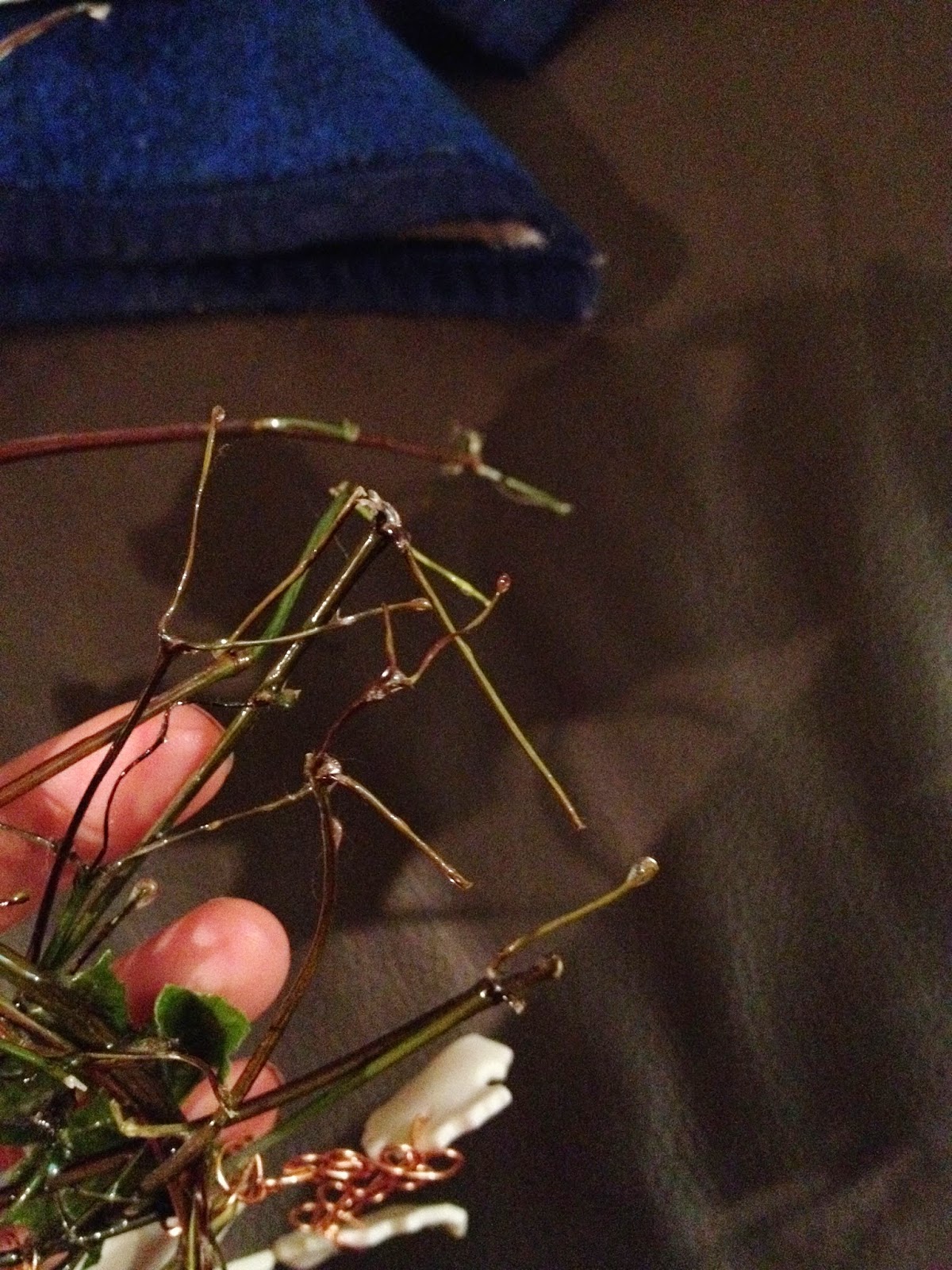 An added (and unseen) bonus of using resin was, because to dry it, I had to hang them (otherwise, if I set them down, they would have dried to whatever surface I laid them on), was gravity pulled the resin into the branch tips and created these shimmery little beads that caught the light and sparkled.

This is the mask I wore to the gala banquet dinner on Saturday (the final official day of the convention).

The second mask I finished (but didn't wear) ended up like this: 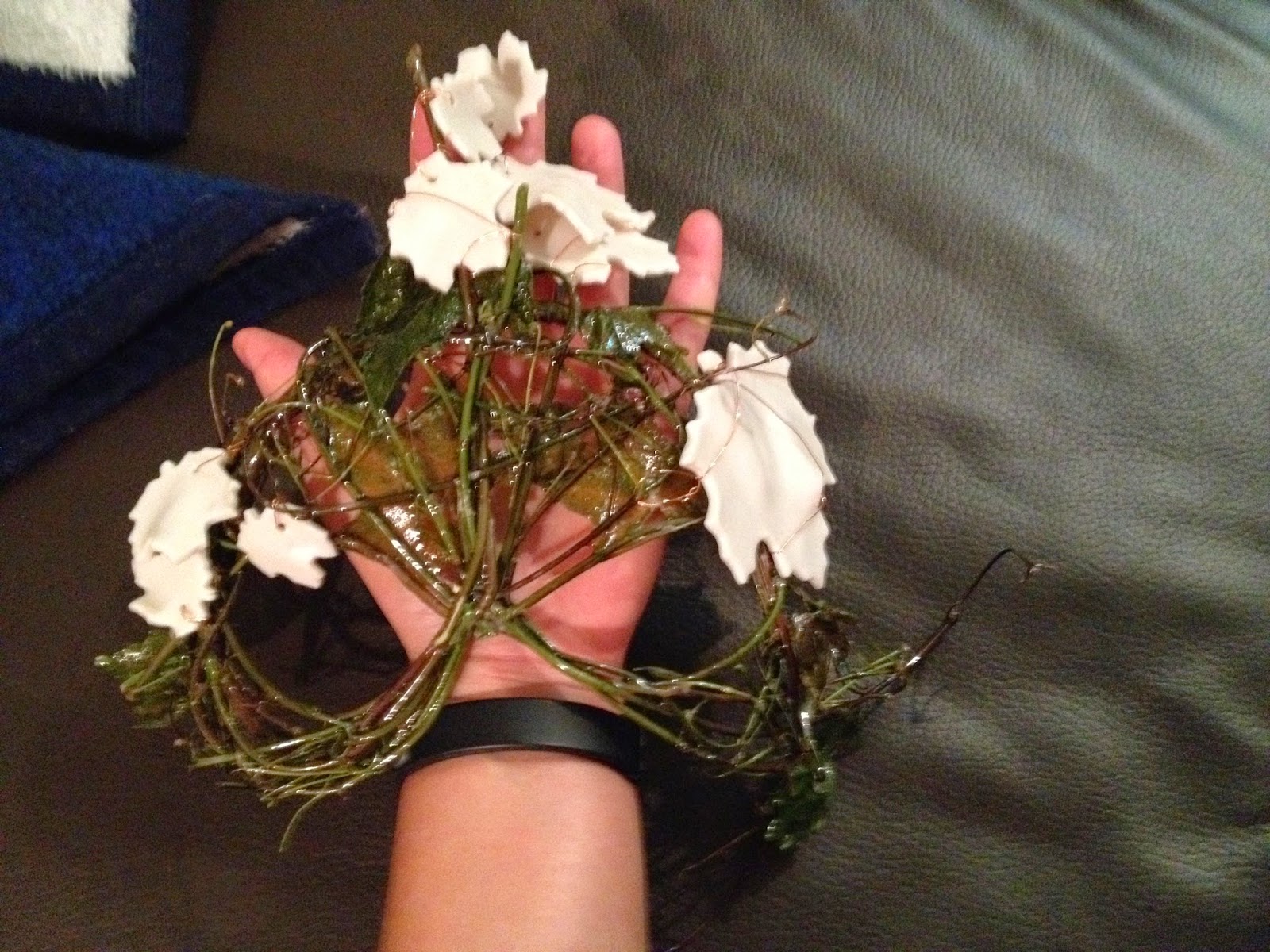 Since this was the second one I made, the weaving is a lot more complex than the first one, so here are some zoomed-in pictures where you can see the details better. 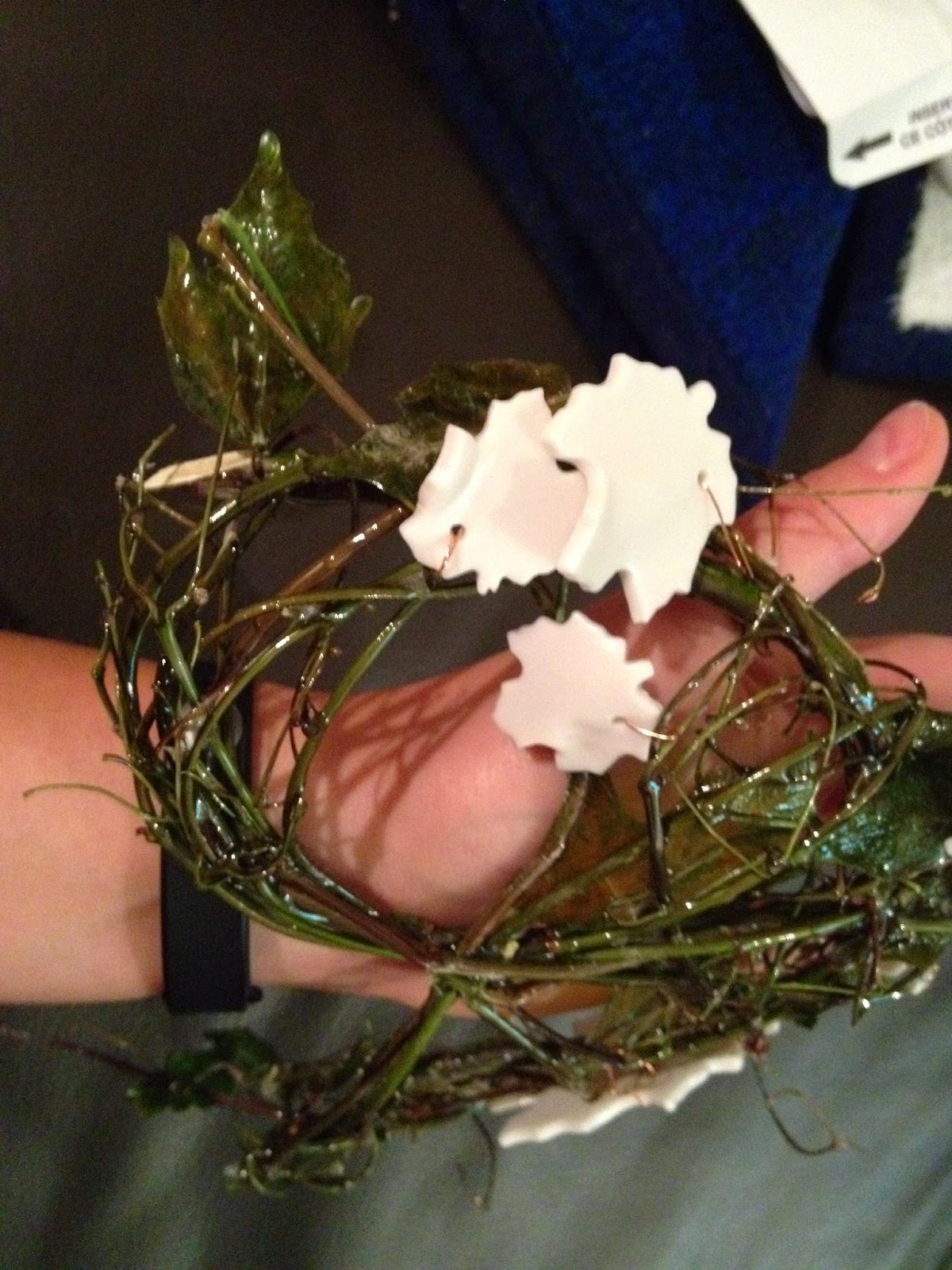 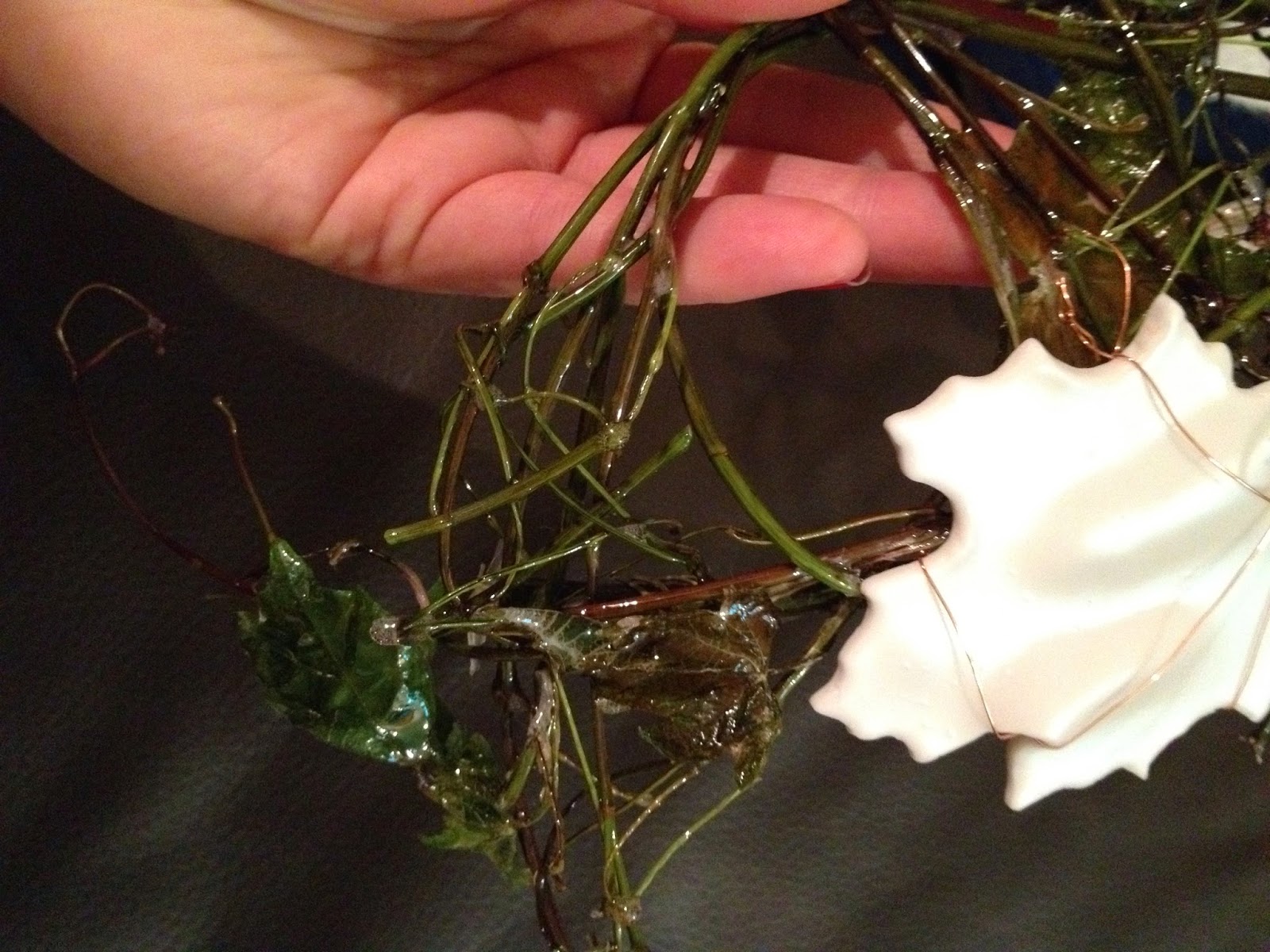 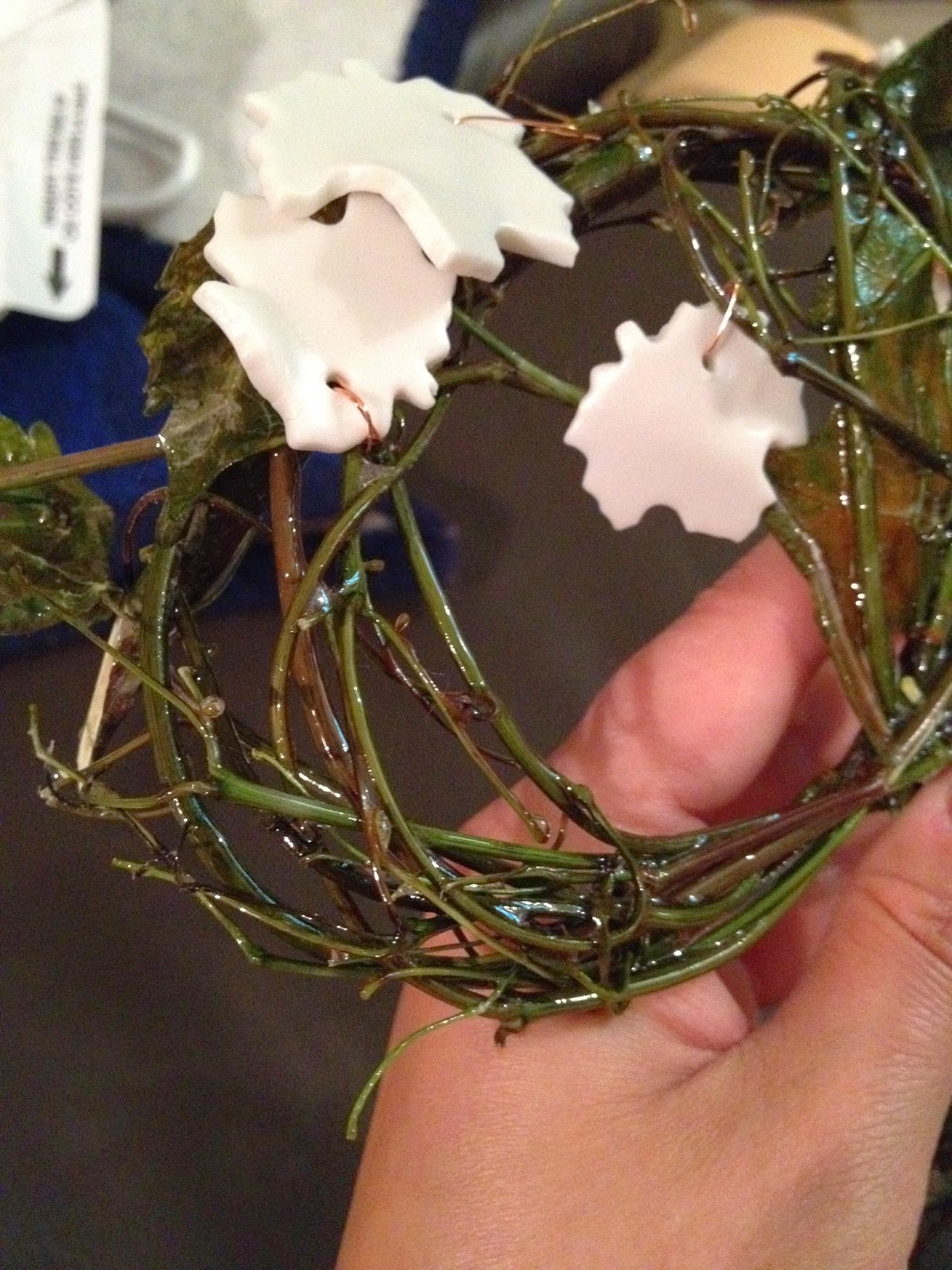 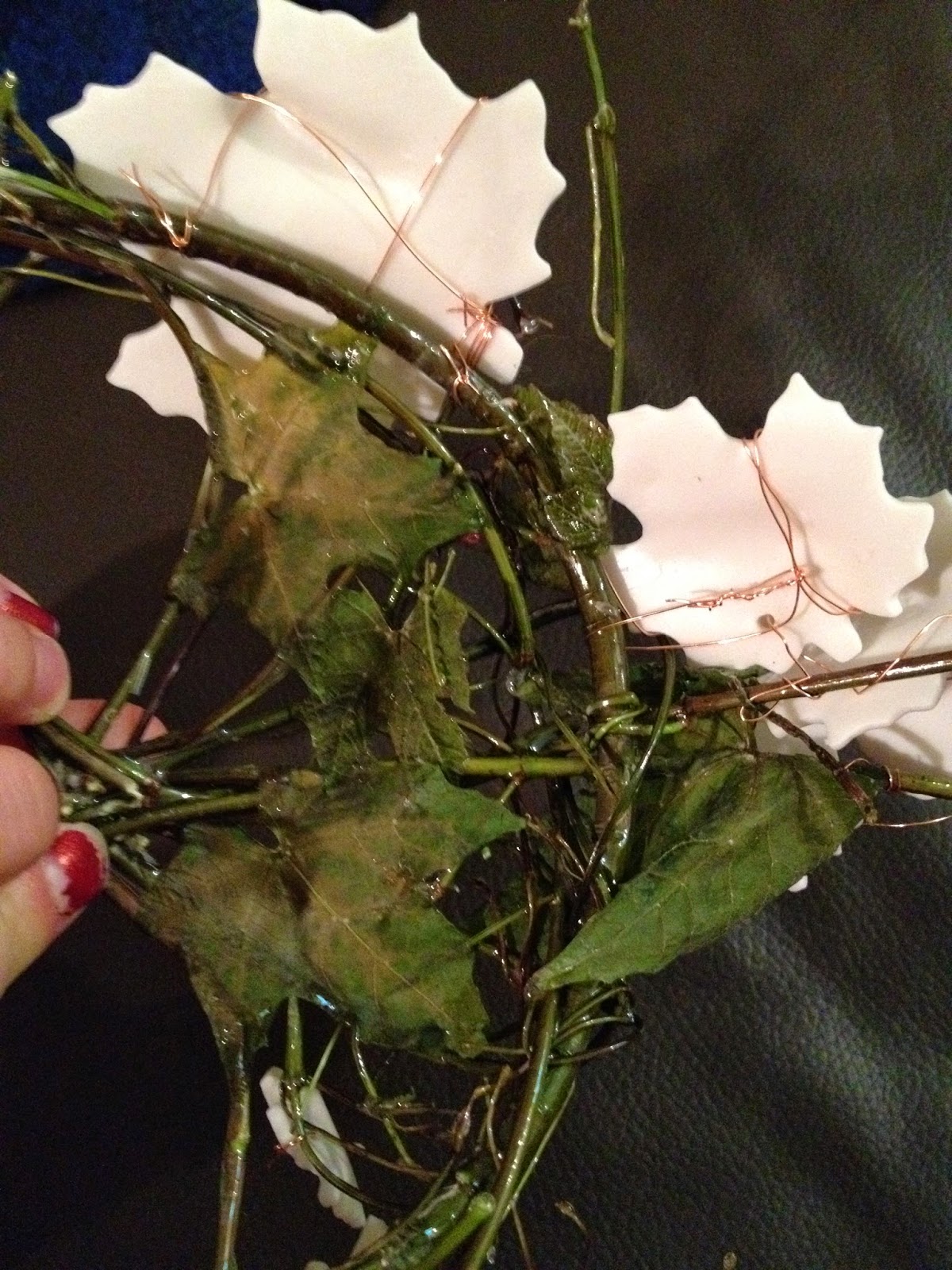 This is the underside of the mask (the part that lays against the forehead). You can see the leaves are starting to turn brown because I didn't coat the backside of these leaves... I ran out of time.


In the end, I feel my first attempt at making a mask out of trees/leaves was successful. I certainly learned a lot while I was working. If I'd had more time, and if my poor arm/shoulder had allowed for it, I would have liked to paint scenes (or something) on the porcelain leaves.

In the end, the masks were meant to be ephemeral. Out of curiosity, I'm going to leave them on a shelf and see what happens to them... if they start to crack, or grow mould inside the resin (since I was sealing up a live leaf that is full of moisture). When they are at the state to be thrown away, I am going to remove the porcelain leaves and will most likely use them in a project in the future.