I'll post stuff about the painting convention soon, but I realized I forgot to put up pictures of this great park I take Eva to (sporadically, as my back/etc allows).

Since I moved in January, I'm now further out in the Greater Vancouver valley, in Langley, so no seawall or Jericho beach walkies anymore.

There are two great parks within easy driving distance though, one called Derby Reach, which is right on the Fraser River, and the other is Tynehead Park, which I'm going to post pictures from.

Both parks have large off-leash areas for Eva to sniff around at her leisure, and both have trails (where she must stay on leash) through very natural forested areas.

I like Tynehead better, even though it's a farther drive. The off-leash area is bigger and it's not just a big flat field, there are hills and the path winds through clusters of trees and bushes. There's also a water fountain (for people, AND one for dogs) right at the entrance so it's easy to re-fill the doggy-water-bottle.

The trails are nicer too, they weave up and down, over wooden bridges that criss-cross the Serpentine River, and there are several loops you can take if you only want to walk 1km, or 4km, or even 8km.

It's very similar to where I grew up, my neighbours had about 16 acres of forested land that I played in as a child, and walking through Tynehead is like reliving those years of clambering through gullies, streams, scampering up trees, and hiding in tree trunks so large, a grown man could stand inside, stretch his arms, and never touch the sides.

Usually I don't take my phone with me while I'm walking, but two months or so ago, I did since it's was a nice day and I wanted to take pictures. This flower is a salmonberry flower. The season for the berries is near its end, but I have been gorging myself whenever I get the chance. It's the first spring berry, followed by huckleberries and thimbleberries, all very tasty wild PNW berries, which are in season now, and the wild blackberries (these are tiny, about 1/4 the size of the blackberries you'd get in a store, and grow on the ground in a low, creeping vine, not in the huge bushes -> those are an invasive species) are just starting to ripen. 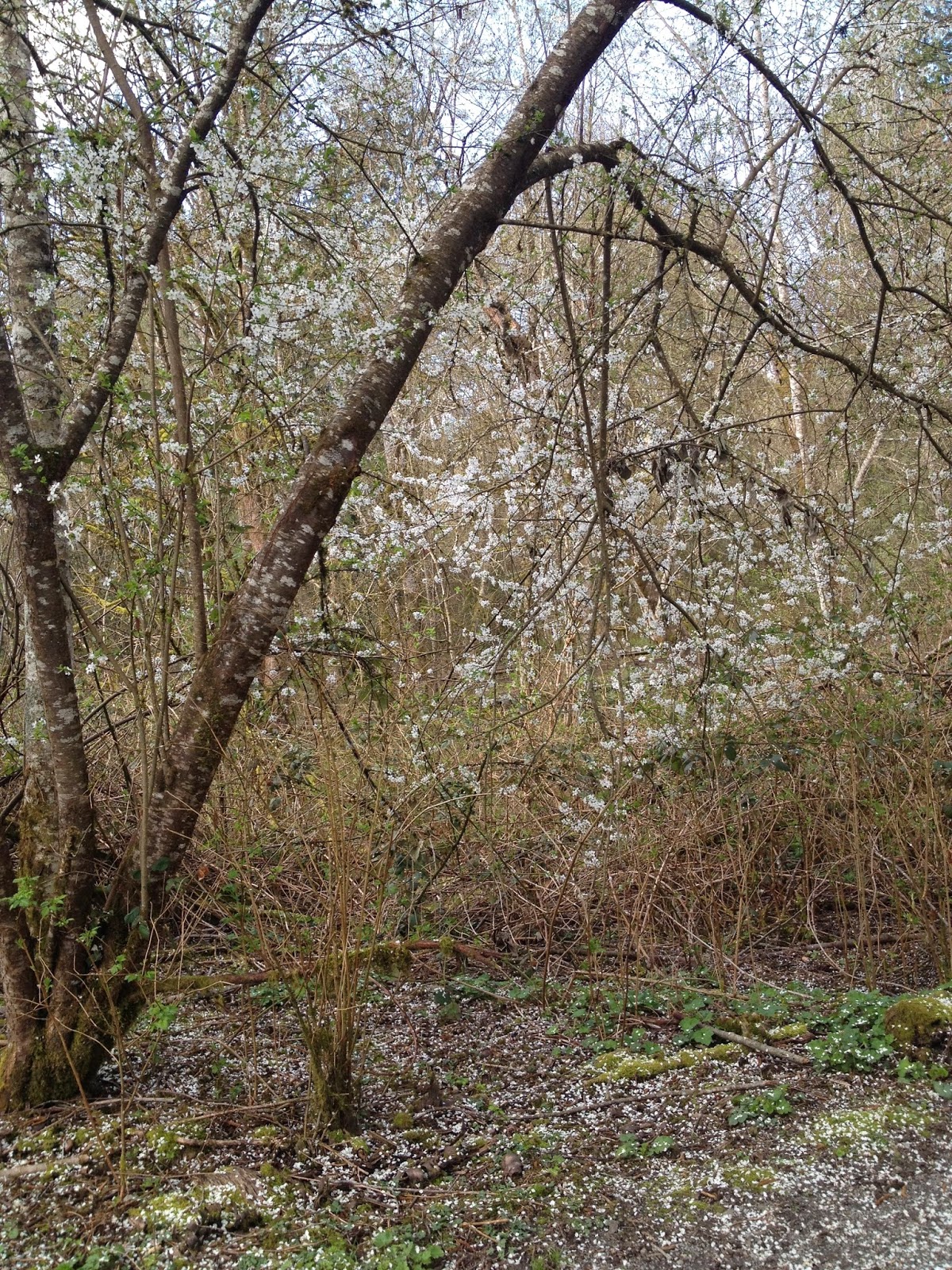 This is a wild cherry, the earliest flowering tree, which blooms slightly before the ornamental species. There's a closeup of the flowers below. They are dropping their fruit now, and they're tasty, but sour. They are so plentiful that bears have come into the area (there are warning signs up everywhere) and you can see their poop full of cherry pits on the trails. 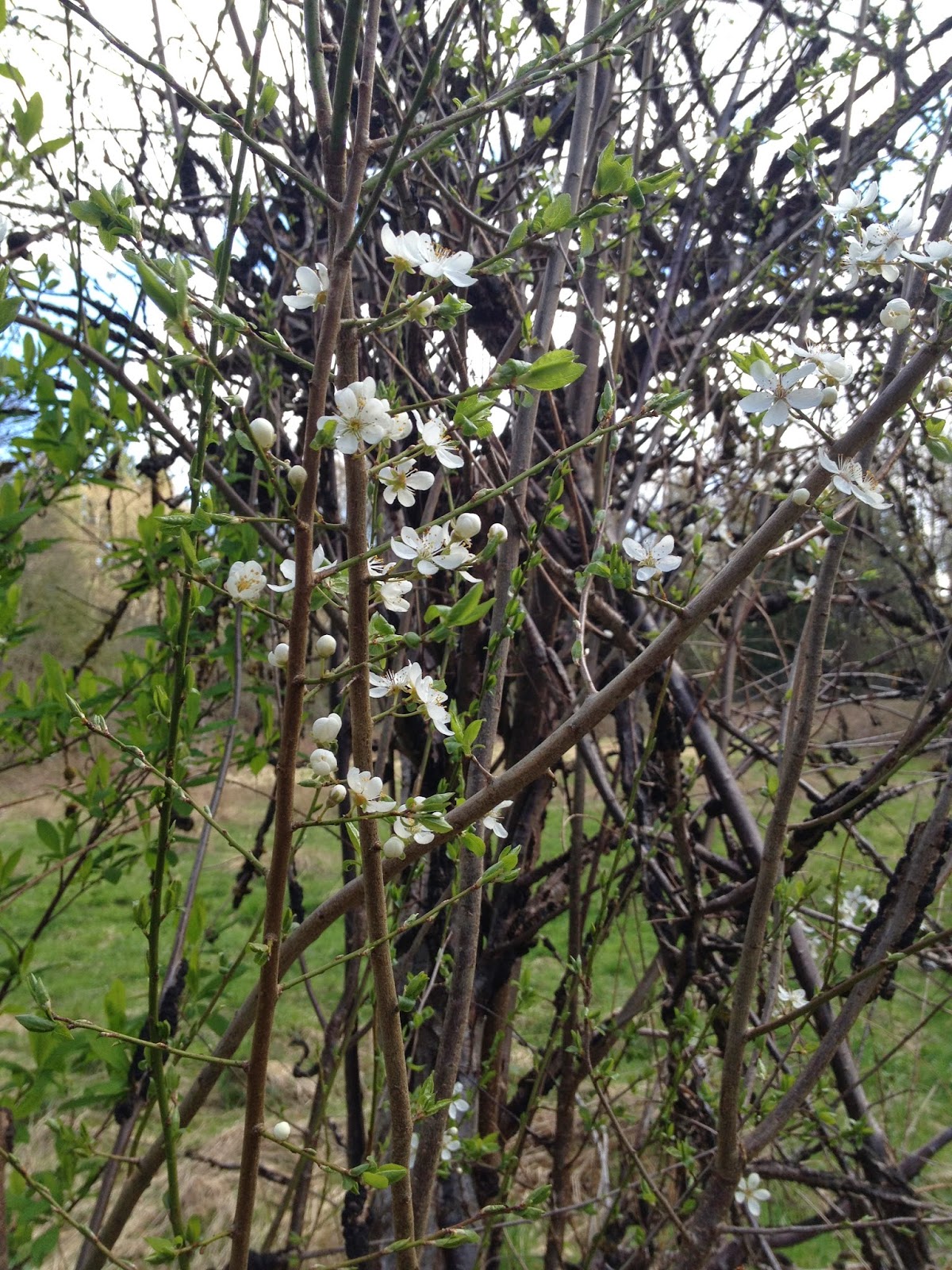 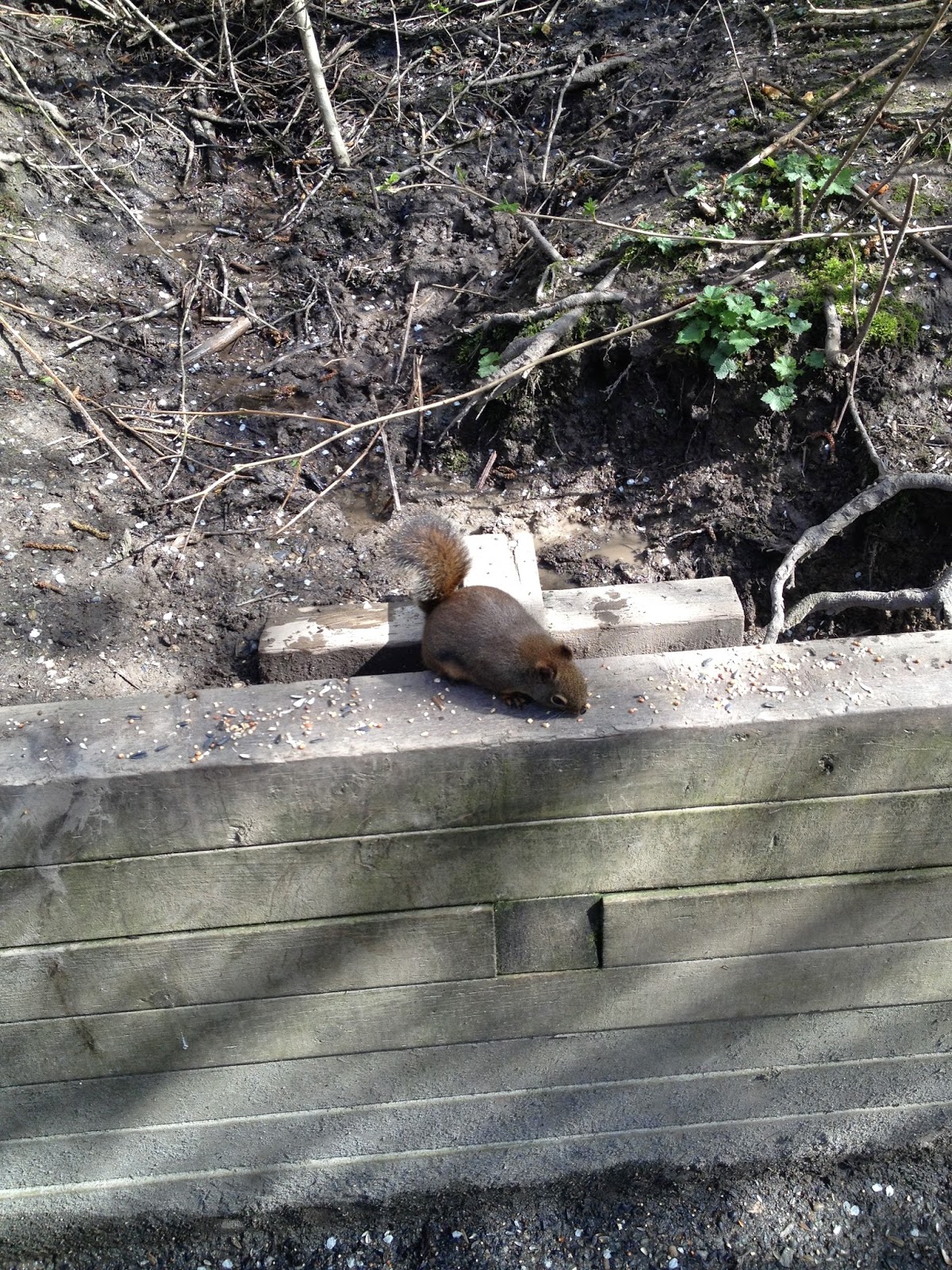 So cute, a little local squirrel that people have (obviously) been feeding so it's super tame. I'm glad Eva was leashed because as soon as she saw it, she went crazy! 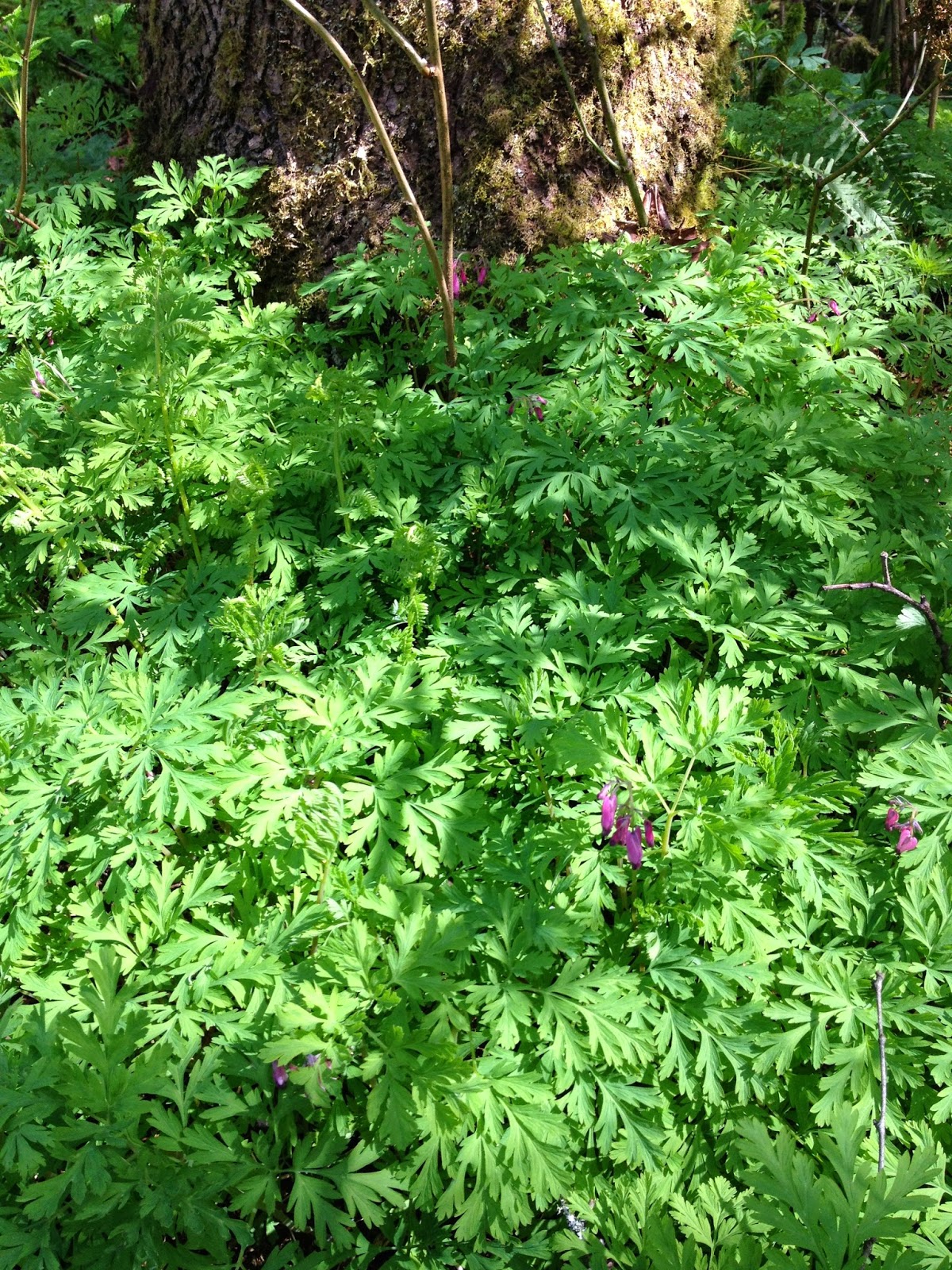 Wild bleeding hearts. I love these. Only a couple of blooms in this picture as it was a little too early. 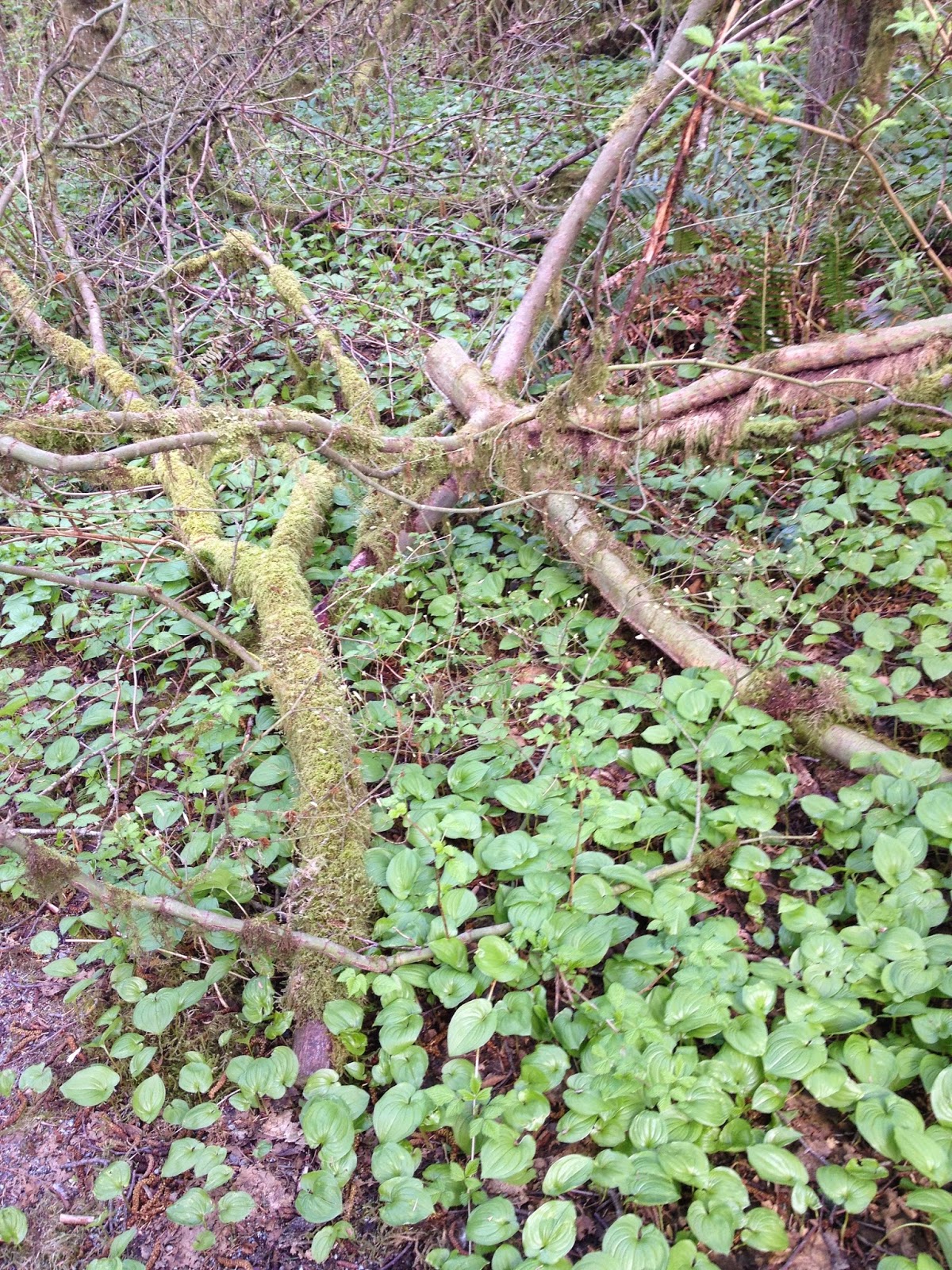 And this! This is wild ginger that carpets the forest floor in green. 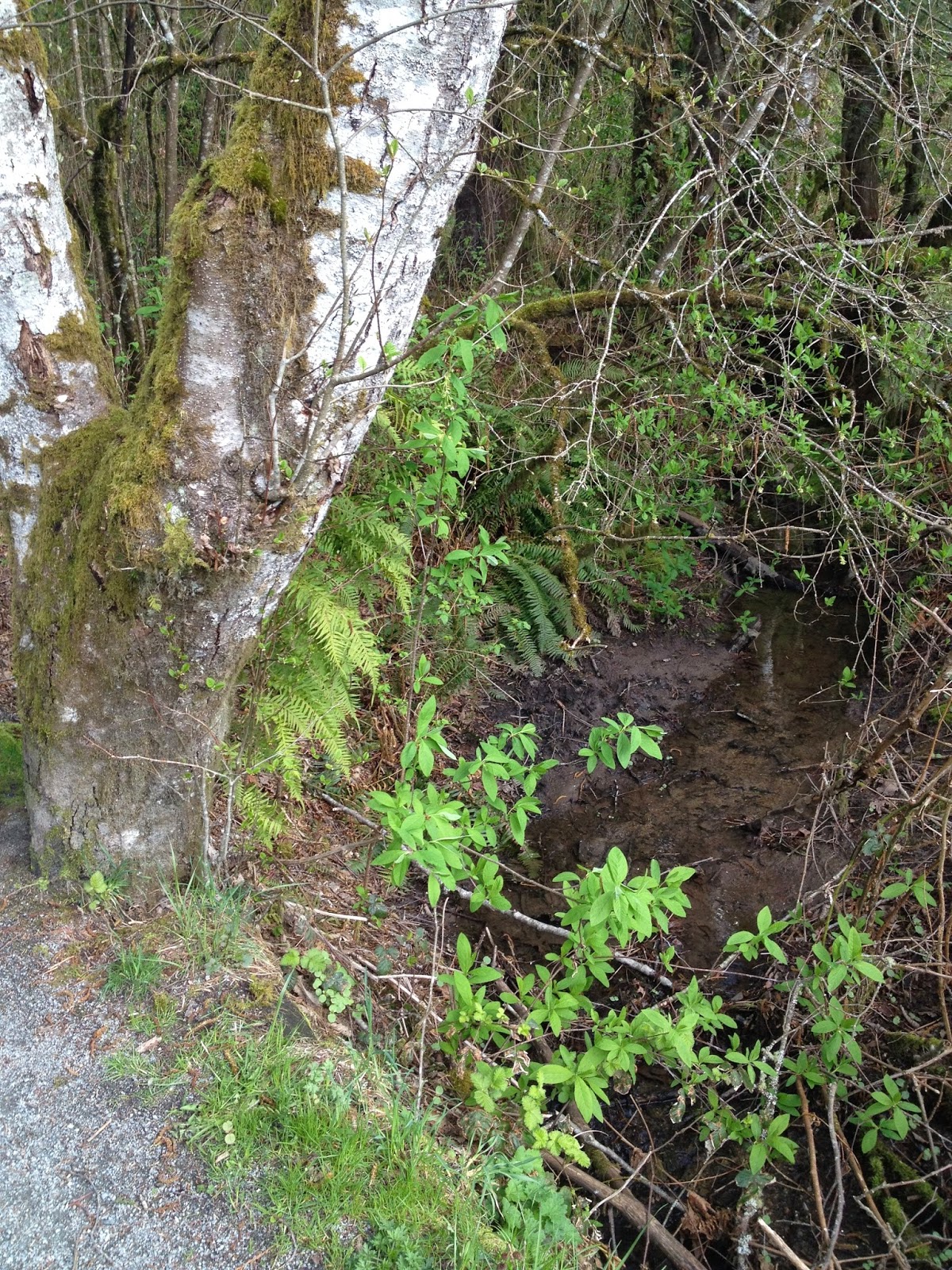 The next few pictures are just random shots taken from the trails to give you an idea of what it's like to walk around in. 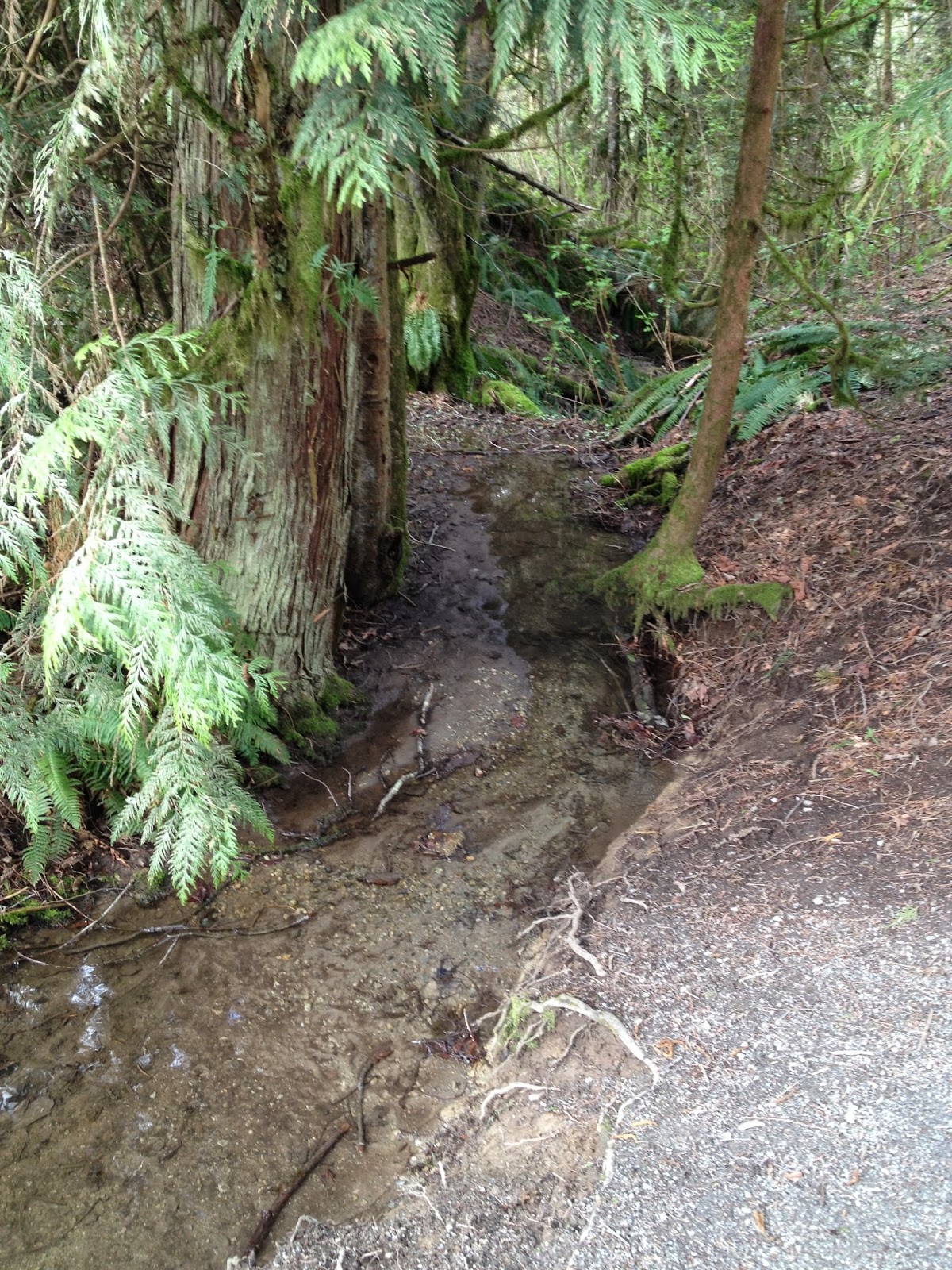 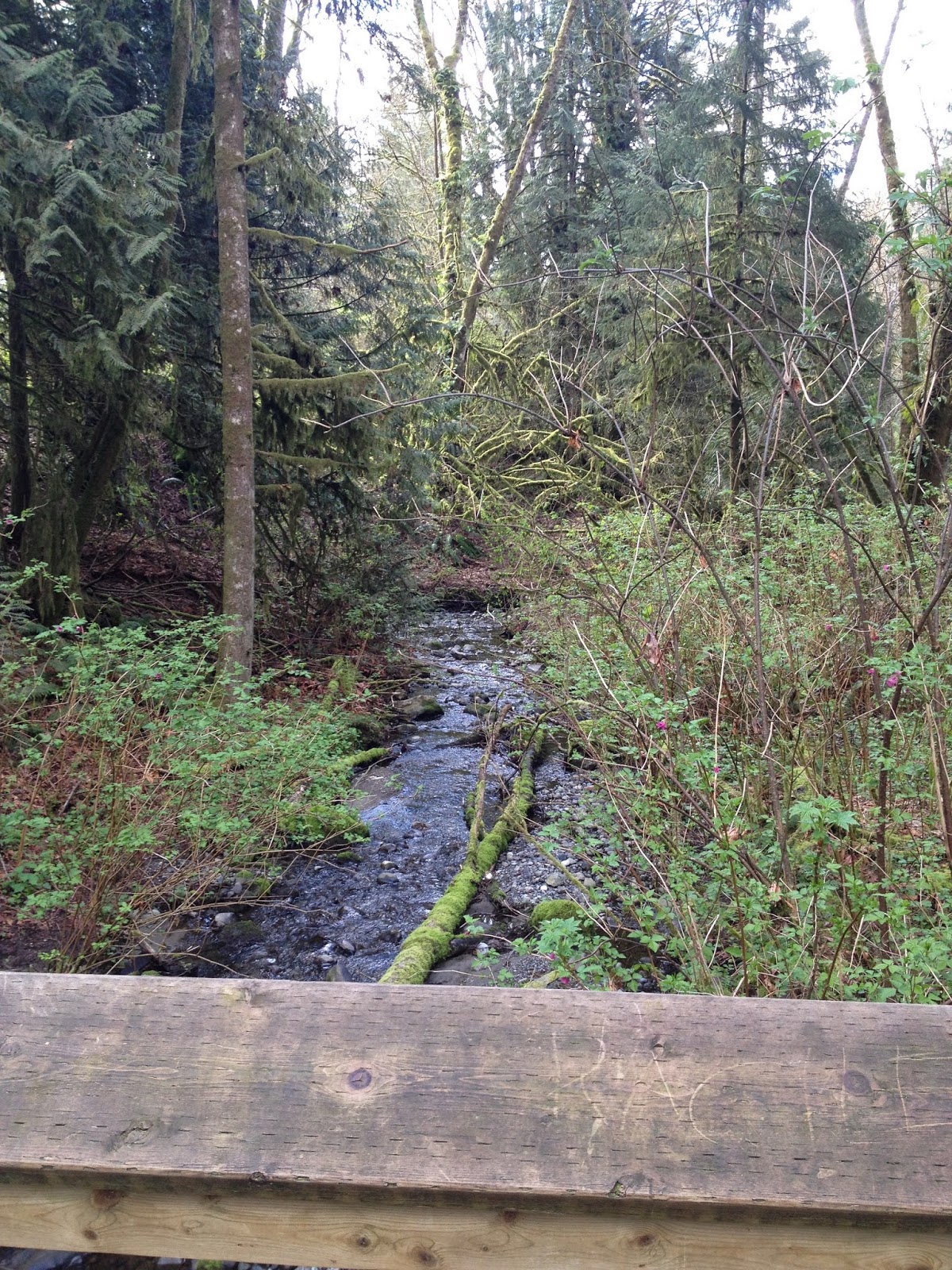 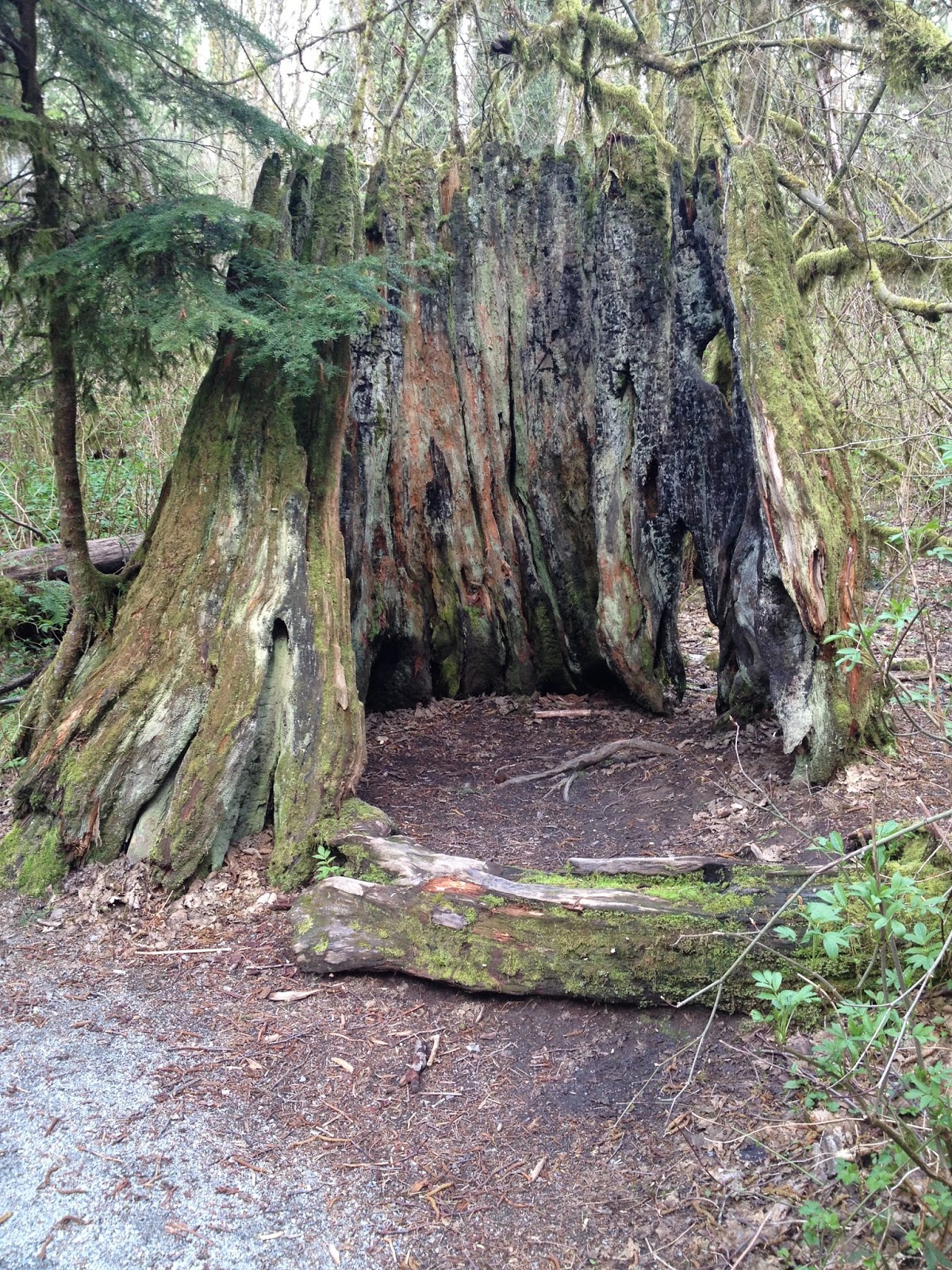 Here's one of the bit stumps. I think these are all old-growth cedar, which would have been a couple hundred years old before they were cut down, or fell down, or whatever happened. 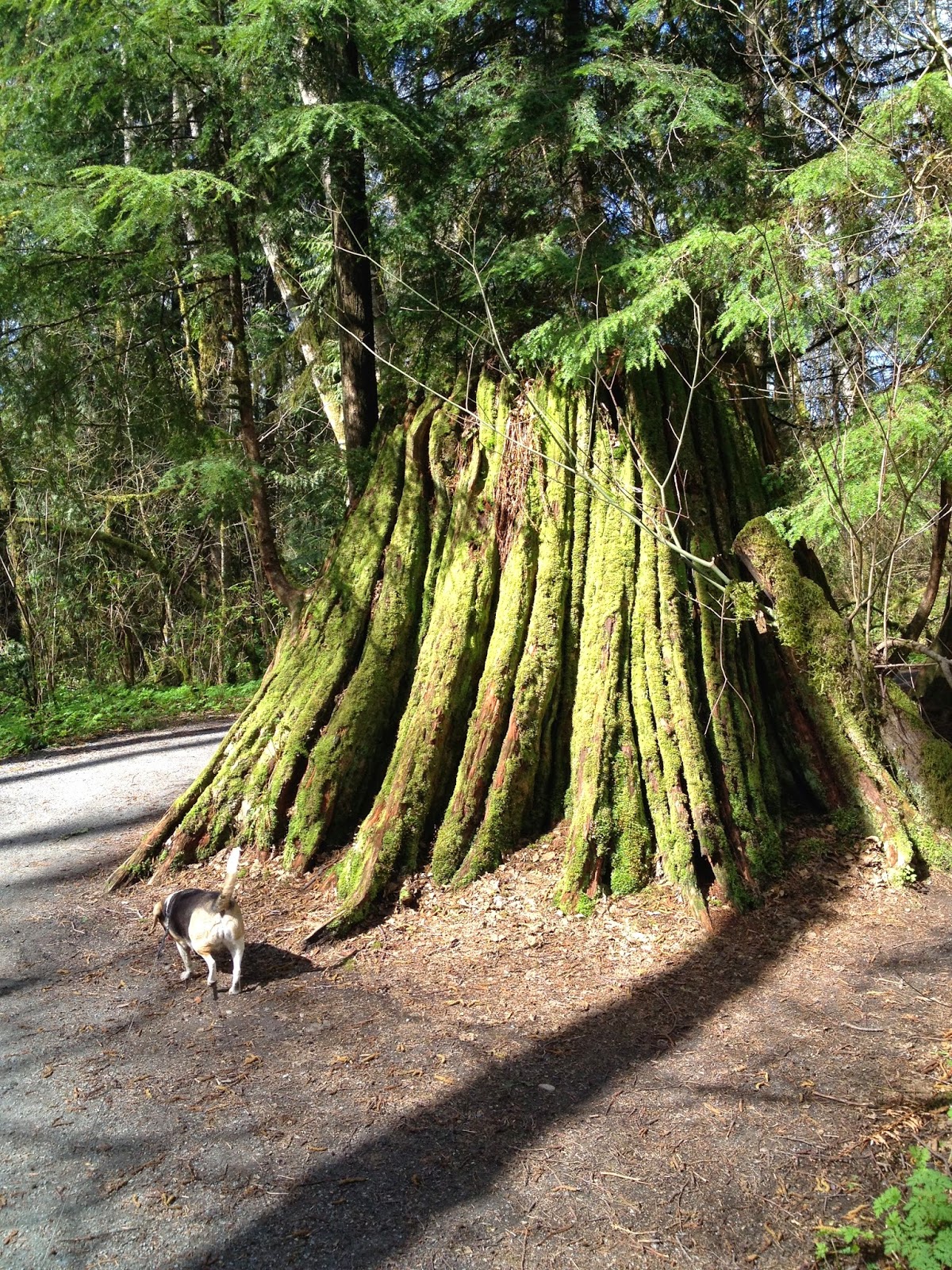 This stump is a nurse stump -> which means other trees start growing on it, and as it decomposes, it fertilizes them. 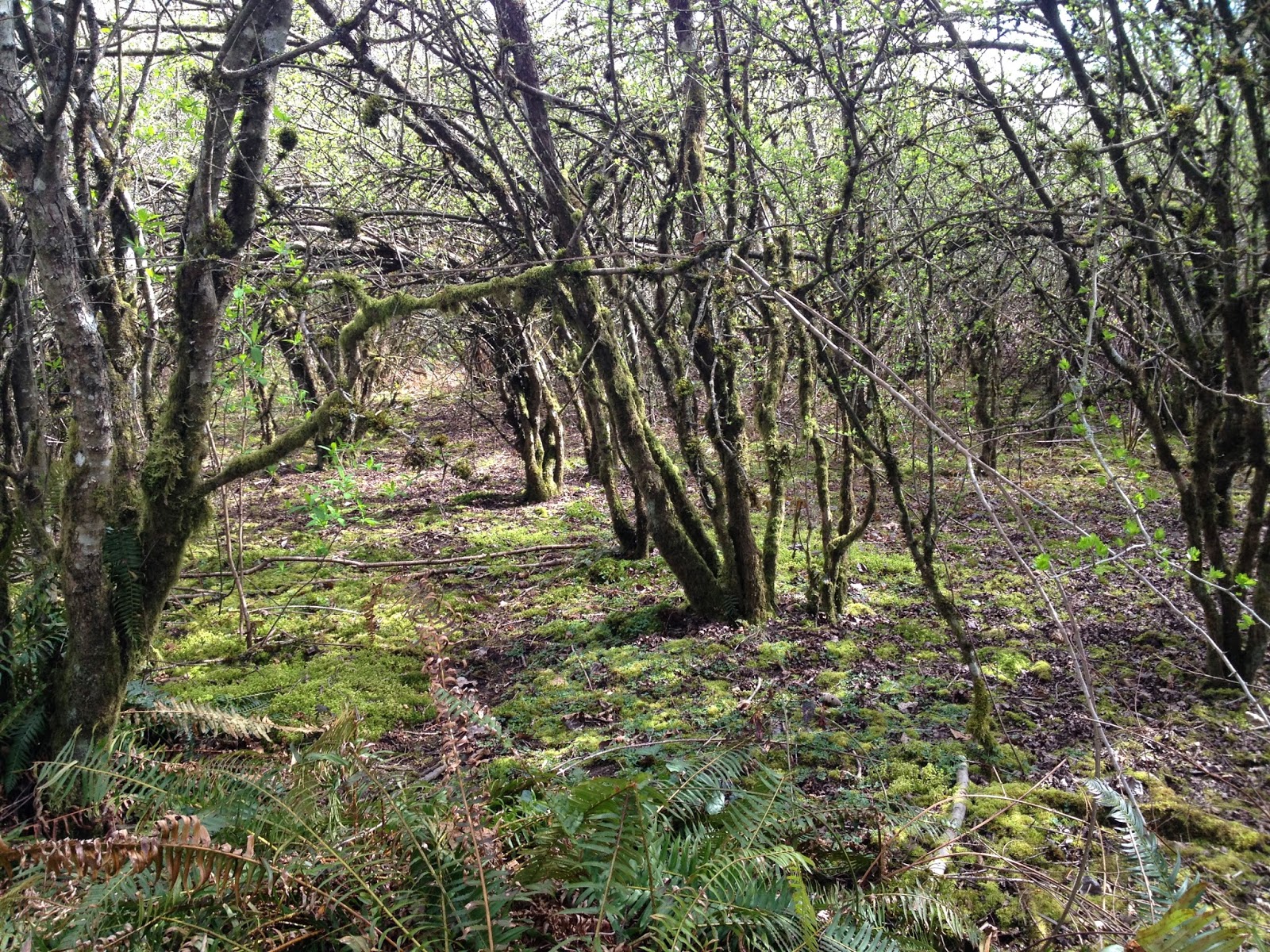 Just a different part of the park. There is a trail through this, and it's like walking through a tunnel. Very cool.
Posted by 1000th.monkey at 1:14 PM